Mangroves management and development in the Philippines. 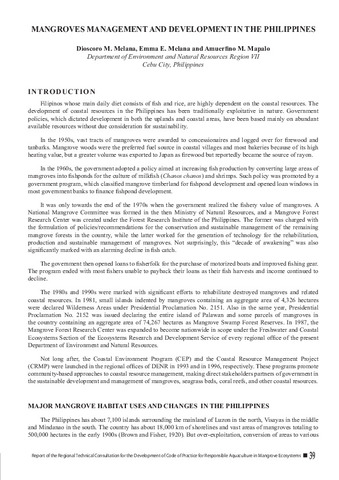 Filipinos whose main daily diet consists of fish and rice, are highly dependent on the coastal resources. The development of coastal resources in the Philippines has been traditionally exploitative in nature. Government policies, which dictated development in both the uplands and coastal areas, have been based mainly on abundant available resources without due consideration for sustainability. In the 1950s, vast tracts of mangroves were awarded to concessionaires and logged over for firewood and tanbarks. Mangrove woods were the preferred fuel source in coastal villages and most bakeries because of its high heating value, but a greater volume was exported to Japan as firewood but reportedly became the source of rayon. In the 1960s, the government adopted a policy aimed at increasing fish production by converting large areas of mangroves into fishponds for the culture of milkfish (Chanos chanos) and shrimps. Such policy was promoted by a government program, which classified mangrove timberland for fishpond development and opened loan windows in most government banks to finance fishpond development. It was only towards the end of the 1970s when the government realized the fishery value of mangroves. A National Mangrove Committee was formed in the then Ministry of Natural Resources, and a Mangrove Forest Research Center was created under the Forest Research Institute of the Philippines. The former was charged with the formulation of policies/recommendations for the conservation and sustainable management of the remaining mangrove forests in the country, while the latter worked for the generation of technology for the rehabilitation, production and sustainable management of mangroves. Not surprisingly, this “decade of awakening” was also significantly marked with an alarming decline in fish catch. The government then opened loans to fisherfolk for the purchase of motorized boats and improved fishing gear. The program ended with most fishers unable to payback their loans as their fish harvests and income continued to decline. The 1980s and 1990s were marked with significant efforts to rehabilitate destroyed mangroves and related coastal resources. In 1981, small islands indented by mangroves containing an aggregate area of 4,326 hectares were declared Wilderness Areas under Presidential Proclamation No. 2151. Also in the same year, Presidential Proclamation No. 2152 was issued declaring the entire island of Palawan and some parcels of mangroves in the country containing an aggregate area of 74,267 hectares as Mangrove Swamp Forest Reserves. In 1987, the Mangrove Forest Research Center was expanded to become nationwide in scope under the Freshwater and Coastal Ecosystems Section of the Ecosystems Research and Development Service of every regional office of the present Department of Environment and Natural Resources. Not long after, the Coastal Environment Program (CEP) and the Coastal Resource Management Project (CRMP) were launched in the regional offices of DENR in 1993 and in 1996, respectively. These programs promote community-based approaches to coastal resource management, making direct stakeholders partners of government in the sustainable development and management of mangroves, seagrass beds, coral reefs, and other coastal resources.