Research on seaweeds and mollusks 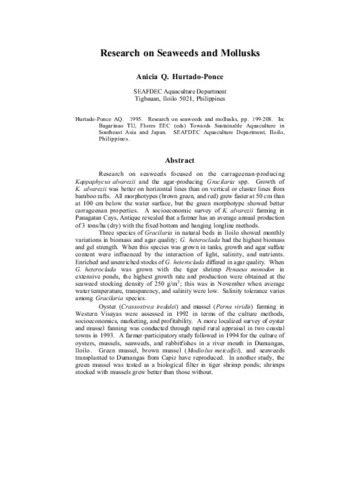 Research on seaweeds focused on the carrageenan-producing Kappaphycus alvarezii and the agar-producing Gracilaria spp. Growth of K. alvarezii was better on horizontal lines than on vertical or cluster lines from bamboo rafts. All morphotypes (brown green, and red) grew faster at 50 cm than at 100 cm below the water surface, but the green morphotype showed better carrageenan properties. A socioeconomic survey of K. alvarezii farming in Panagatan Cays, Antique revealed that a farmer has an average annual production of 3 tons/ha (dry) with the fixed bottom and hanging longline methods. Three species of Gracilaria in natural beds in lloilo showed monthly variations in biomass and agar quality; G. heteroclada had the highest biomass and gel strength. When this species was grown in tanks, growth and agar sulfate content were influenced by the interaction of light, salinity, and nutrients. Enriched and unenriched stocks of G. heteroclada differed in agar quality. When G. heteroclada was grown with the tiger shrimp Penaeus monodon in extensive ponds, the highest growth rate and production were obtained at the seaweed stocking density of 250 g/m2; this was in November when average water temperature, transparency, and salinity were low. Salinity tolerance varies among Gracilaria species.Oyster (Crassostrea iredalei) and mussel (Perna viridis) farming in Western Visayas were assessed in 1992 in terms of the culture methods, socioeconomics, marketing, and profitability. A more localized survey of oyster and mussel fanning was conducted through rapid rural appraisal in two coastal towns in 1993. A farmer-participatory study followed in 1994 for the culture of oysters, mussels, seaweeds, and rabbitfishes in a river mouth in Dumangas, lloilo. Green mussel, brown mussel (Modiolus metcalfei), and seaweeds transplanted to Dumangas from Capiz have reproduced. In another study, the green mussel was tested as a biological filter in tiger shrimp ponds; shrimps stocked with mussels grew better than those without. A nationwide survey on the Placuna placenta fishery in 1993 showed 27 remaining 'kapis' beds; many others have been depleted due to excessive gathering, pollution, siltation, and trawling. Broodstocks are being developed to produce 'kapis' seed for grow-out and restocking. For the first time at AQD, adult donkey-ear abalone Haliotis asinina from the wild spawned naturally in laboratory tanks. Juvenile abalones can be successfully grown on Gracilaria or abalone diet.