The SEAFDEC Aquaculture Department at 21: R&D for sustainable aquaculture 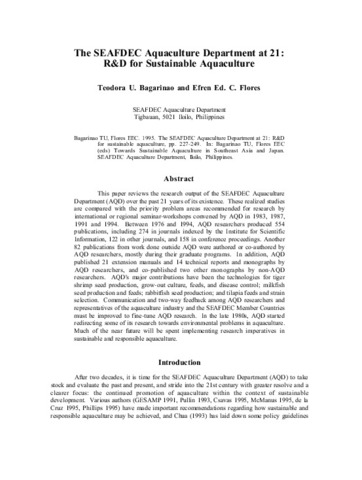 This paper reviews the research output of the SEAFDEC Aquaculture Department (AQD) over the past 21 years of its existence. These realized studies are compared with the priority problem areas recommended for research by international or regional seminar-workshops convened by AQD in 1983, 1987, 1991 and 1994. Between 1976 and 1994, AQD researchers produced 554 publications, including 274 in journals indexed by the Institute for Scientific Information, 122 in other journals, and 158 in conference proceedings. Another 82 publications from work done outside AQD were authored or co-authored by AQD researchers, mostly during their graduate programs. In addition, AQD published 21 extension manuals and 14 technical reports and monographs by AQD researchers, and co-published two other monographs by non-AQD researchers. AQD's major contributions have been the technologies for tiger shrimp seed production, grow-out culture, feeds, and disease control; milkfish seed production and feeds; rabbitfish seed production; and tilapia feeds and strain selection. Communication and two-way feedback among AQD researchers and representatives of the aquaculture industry and the SEAFDEC Member Countries must be improved to fine-tune AQD research. In the late 1980s, AQD started redirecting some of its research towards environmental problems in aquaculture. Much of the near future will be spent implementing research imperatives in sustainable and responsible aquaculture.