Nursery and grow-out operation for tilapia and carp 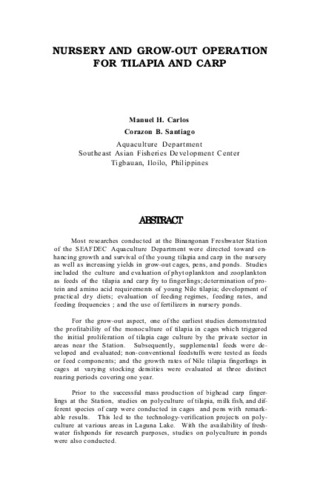 Most researches conducted at the Binangonan Freshwater Station of the SEAFDEC Aquaculture Department were directed toward enhancing growth and survival of the young tilapia and carp in the nursery as well as increasing yields in grow-out cages, pens, and ponds. Studies included the culture and evaluation of phytoplankton and zooplankton as feeds of the tilapia and carp fry to fingerlings; determination of protein and amino acid requirements of young Nile tilapia; development of practical dry diets; evaluation of feeding regimes, feeding rates, and feeding frequencies ; and the use of fertilizers in nursery ponds. For the grow-out aspect, one of the earliest studies demonstrated the profitability of the monoculture of tilapia in cages which triggered the initial proliferation of tilapia cage culture by the private sector in areas near the Station. Subsequently, supplemental feeds were developed and evaluated; non-conventional feedstuffs were tested as feeds or feed components; and the growth rates of Nile tilapia fingerlings in cages at varying stocking densities were evaluated at three distinct rearing periods covering one year. Prior to the successful mass production of bighead carp fingerlings at the Station, studies on polyculture of tilapia, milk fish, and different species of carp were conducted in cages and pens with remarkable results. This led to the technology-verification projects on polyculture at various areas in Laguna Lake. With the availability of freshwater fishponds for research purposes, studies on polyculture in ponds were also conducted.