Development of aquaculture industry in Southeast Asia: An overview 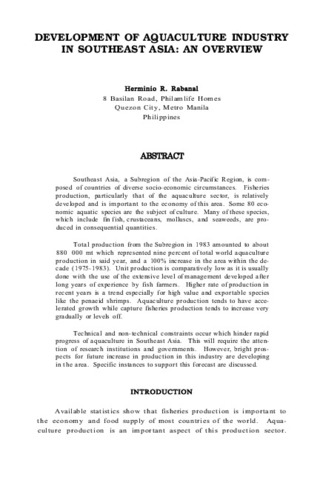 Southeast Asia, a Subregion of the Asia-Pacific Region, is composed of countries of diverse socio-economic circumstances. Fisheries production, particularly that of the aquaculture sector, is relatively developed and is important to the economy of this area. Some 80 economic aquatic species are the subject of culture. Many of these species, which include fin fish, crustaceans, molluscs, and seaweeds, are produced in consequential quantities. Total production from the Subregion in 1983 amounted to about 880 000 mt which represented nine percent of total world aquaculture production in said year, and a 100% increase in the area within the decade (1975-1983). Unit production is comparatively low as it is usually done with the use of the extensive level of management developed after long years of experience by fish farmers. Higher rate of production in recent years is a trend especially for high value and exportable species like the penaeid shrimps. Aquaculture production tends to have accelerated growth while capture fisheries production tends to increase very gradually or levels off. Technical and non-technical constraints occur which hinder rapid progress of aquaculture in Southeast Asia. This will require the attention of research institutions and governments. However, bright prospects for future increase in production in this industry are developing in the area. Specific instances to support this forecast are discussed.