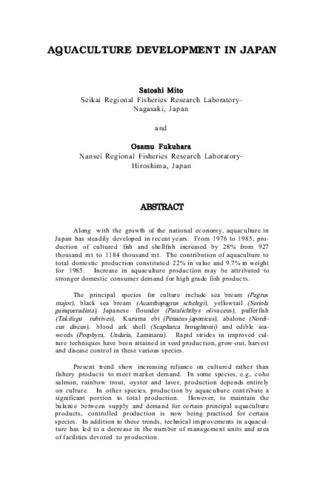 Along with the growth of the national economy, aquaculture in Japan has steadily developed in recent years. From 1976 to 1985, production of cultured fish and shellfish increased by 28% from 927 thousand mt to 1184 thousand mt. The contribution of aquaculture to total domestic production constituted 22% in value and 9.7% in weight for 1985. Increase in aquaculture production may be attributed to stronger domestic consumer demand for high grade fish products. The principal species for culture include sea bream (Pagrus major), black sea bream (Acanthopagrus schelegi), yellowtail (Seriola guinqueradiata), Japanese flounder (Paralichthys olivaceus), pufferfish (Takifugu rubrives), Kuruma ebi (Penaeus japonicus), abalone (Nordicus discus), blood ark shell (Scapharca broughtonii) and edible seaweeds (Porphyra, Undaria, Laminaria). Rapid strides in improved culture techniques have been attained in seed production, grow-out, harvest and disease control in these various species. Present trend show increasing reliance on cultured rather than fishery products to meet market demand. In some species, e.g., coho salmon, rainbow trout, oyster and laver, production depends entirely on culture. In other species, production by aquaculture contribute a significant portion to total production. However, to maintain the balance between supply and demand for certain principal aquaculture products, controlled production is now being practised for certain species. In addition to these trends, technical improvements in aquaculture has led to a decrease in the number of management units and area of facilities devoted to production. In the future, greater efforts will be directed to diversify the species cultured to suit consumer preference. Emphasis will also be placed on improving taste and texture of cultured products. New types of feed that will not pollute areas around the culture facilities will be developed. Remarkable achievements in biotechnology will also be applied in aquaculture to improve seed quality. Parallel with developments in aquaculture, Japan is exerting greater efforts to propagate fishery resources in coastal waters through stock enhancement activities. This is aimed at establishing a multiple fish and shellfish propagation system in the seas surrounding Japan to maintain or increase production from fishery resources.