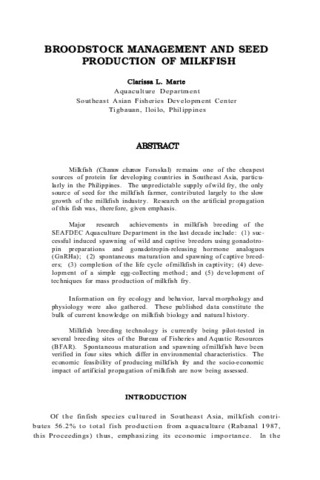 Milkfish (Chanos chanos Forsskal) remains one of the cheapest sources of protein for developing countries in Southeast Asia, particularly in the Philippines. The unpredictable supply of wild fry, the only source of seed for the milkfish farmer, contributed largely to the slow growth of the milkfish industry. Research on the artificial propagation of this fish was, therefore, given emphasis. Major research achievements in milkfish breeding of the SEAFDEC Aquaculture Department in the last decade include: (1) successful induced spawning of wild and captive breeders using gonadotropin preparations and gonadotropin-releasing hormone analogues (GnRHa); (2) spontaneous maturation and spawning of captive breeders; (3) completion of the life cycle of milkfish in captivity; (4) development of a simple egg-collecting method; and (5) development of techniques for mass production of milkfish fry. Information on fry ecology and behavior, larval morphology and physiology were also gathered. These published data constitute the bulk of current knowledge on milkfish biology and natural history. Milkfish breeding technology is currently being pilot-tested in several breeding sites of the Bureau of Fisheries and Aquatic Resources (BFAR). Spontaneous maturation and spawning of milkfish have been verified in four sites which differ in environmental characteristics. The economic feasibility of producing milkfish fry and the socio-economic impact of artificial propagation of milkfish are now being assessed.