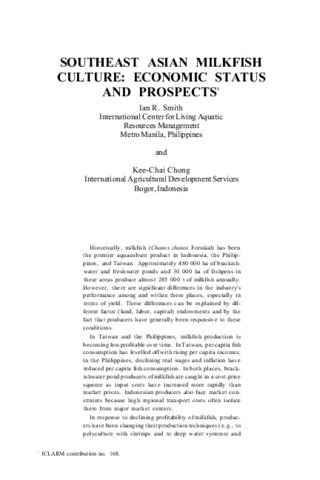 Historically, milkfish (Chanos chanos Forsskal) has been the premier aquaculture product in Indonesia, the Philippines, and Taiwan. However, there are significant differences in the industry's performance among and within these places, especially in terms of yield. These differences can be explained by different factor (land, labor, capital) endowments and by the fact that producers have generally been responsive to these conditions. In Taiwan and the Philippines, milkfish production is becoming less profitable over time. In both places, brackishwater pond producers of milkfish are caught in a cost-price squeeze as input costs have increased more rapidly than market prices. Indonesian producers also face market constraints because high regional transport costs often isolate them from major market centers. In response to declining profitability of milkfish, producers have been changing their production techniques and shifting to the culture of other species such as tilapia that currently have greater domestic or export market potential. Although total milkfish production continues to increase, in the Philippines and Indonesia at least, milkfish's traditional share of total aquaculture production in all these places has declined quite dramatically over the last 10 years, and this trend is likely to continue.