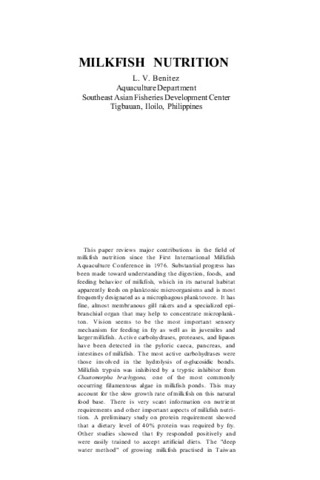 This paper reviews major contributions in the field of milkfish (Chanos chanos ) nutrition since the First International Milkfish Aquaculture Conference in 1976. Substantial progress has been made toward understanding the digestion, foods, and feeding behavior of milkfish, which in its natural habitat apparently feeds on planktonic microorganisms and is most frequently designated as a microphagons planktivore. Vision seems to be the most important sensory mechanism for feeding in fry as well as in juvenilles and larger milkfish. There is very scant information on nutrient requirements and other important aspects of milkfish nutrition. A preliminary study on protein requirement showed that a dietary level of 40% protein was required by fry. Other studies showed that fry responded positively and were easily trained to accept artificial diets. The "deep water method" of growing milkfish practised in Taiwan demonstrated that, with the use of formulated diets, productivity in milkfish aquaculture could be increased three-fold over traditional culture methods, which rely on natural food bases.