Economic and technological aspects of the Indonesian milkfish industry 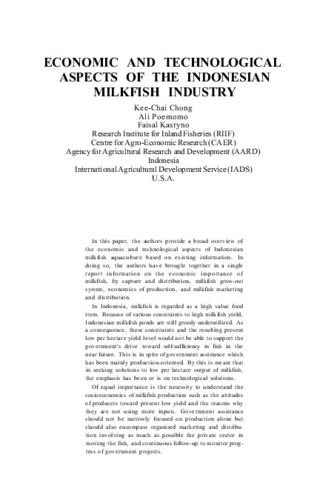 A broad overview is presented of the economic and technological aspects of Indonesian milkfish (Chanos chanos ) aquaculture covering information on the economic importance of milkfish, fry capture and distribution, milkfish grow-out system, economics of production, and milkfish marketing and distribution. In Indonesia, milkfish is regarded as a high value food item. Because of various constraints to high milkfish yield, Indonesian milkfish ponds are still grossly underutilized. As a consequence, these constraints and the resulting present low per hectare yield level would not be able to support the government s drive toward self-sufficiency in fish in the near future. Understanding socioeconomics of milkfish production such as the attitudes of producers toward present low yield and the reasons why they are not using more inputs is of importance. Government assistance should not be narrowly focused on production alone but should also encompass organized marketing and distribution involving as much as possible the private sector in moving the fish, and continuous follow-up monitor progress of government projects.