The milkfish industry in the Philippines 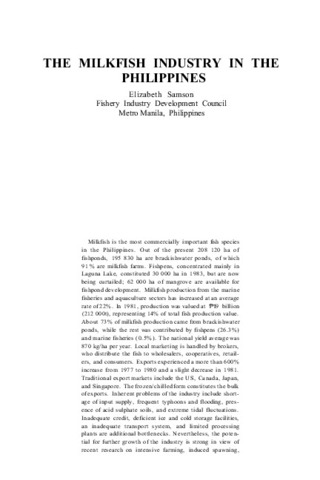 Milkfish (Chanos chanos ) is the most commercially important fish species in the Philippines. Milkfish production from the marine fisheries and aquaculture sectors has increased at an average rate of 22%. In 1981, production was valued at 1.9 billion Philippine dollars (212,000 t), representing 14% of total fish production value. About 73% of milkfish production came from brackishwater ponds, while the rest was contributed by fishpens (26.3%) and marine fisheries (0.5%). The national yield average was 870 kg/ha per year. Local marketing is handled by brokers, who distribute the fish to wholesalers, cooperatives, retailers, and consumers. Exports experienced a more than 600% increase from 1977 to 1980 and a slight decrease in 1981. Despite inherent problems of the industry include, the potential for further growth of the industry is strong in view of recent research on intensive farming, induced spawning, rearing in controlled conditions, and polyculture techniques. The government is providing support through the establishment of infrastructure facilities, strengthening of extension and training, provision of credit, and development of efficient marketing.