The ecological aspects of milkfish fry occurrence, particularly in the Philippines 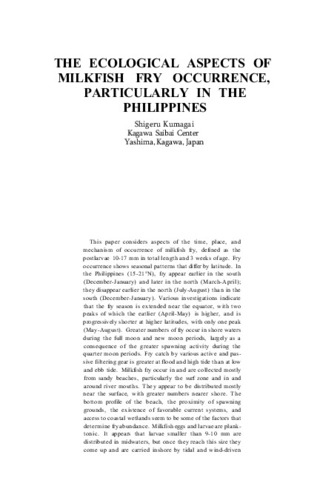 Aspects of the time, place, and mechanism of occurrence of milkfish (Chanos chanos ) fry, defined as the postlarvae 10-17 mm in total length and 3 weeks of age are considered. Fry occurrence shows seasonal patterns that differ by latitude. In the Philippines (15-21 degree N), fry appear earlier in the south (December-January) and later in the north (March-April); they disappear earlier in the north (July-August) than in the south (December-January). Greater numbers of fry occur in shore waters during the full moon and new moon periods, largely as a consequence of the greater spawning activity during the quarter moon periods. Fry catch by various active and passive filtering gear is greater at floods and high tide than at low and ebb tide. Milkfish fry occur in and are collected mostly from sandy beaches, particularly the surf zone and in and around river mouths. They appear to be distributed mostly near the surface, with greater numbers nearer shore. It appears that larvae smaller than 9-10 mm are distributed in midwaters, but once they reach this size they come up and are carried inshore by tidal and wind-driven currents.