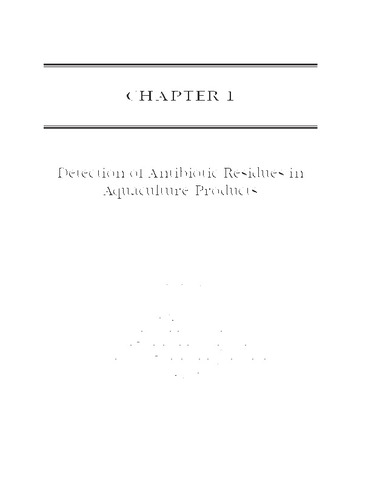 Aquacultured animals are under constant threat from bio-aggressors such as viruses, bacteria, parasites and fungi. These organisms harm either spontaneously or through aquatic animal husbandry practices, and often both. Indeed, it is generally recognized that disease problems follow the development of techniques for animal production. Consequently, fish culture uses a variety of chemicals that represent potential threats to the health of the cultured animal, indigenous biota, and even humans. Chemicals employed in aquaculture include the following: - Drugs used to treat disease (chemical therapeutants) - Chemicals introduced through construction materials - Hormones used to alter reproductive viability, sex, and growth rates Of these, chemotherapeutic drugs are the most harmful. Chemotherapeutic treatments are initiated after clinical signs of a disease appear in a population of fish. Chemicals used in construction and hormones are not considered because they are relatively non-toxic. The use of chemical therapeutants obviously leads to the transit of drugs and to their persistence in products intended for human consumption. It also leads to the release of drugs or their metabolites to the aquatic environment. Hence the criticisms raised in the press against the use of chemotherapy in aquaculture, and the restrictive legislation set up in many countries under pressure of public opinion. It sometimes appears that people would believe that drug resistance of bacteria responsible for human infections originates exclusively, or almost exclusively, from consumption of animal products such as those provided by aquaculture. It should be noted that in addition to the chemicals that are deliberately used, fish raised in aquaculture are also susceptible to contamination via pesticides present in feed, agriculture run-off water, and sediments. The magnitude of human exposure to these sources has not yet been fully assessed and should be examined periodically in light of the growth and change in this sector of the seafood industry.