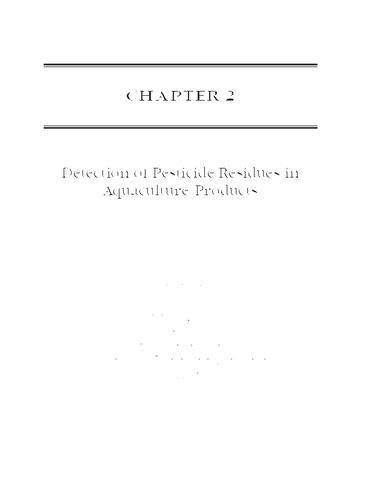 Agricultural chemicals such as fertilizers and pesticides have made an important contribution to agriculture. Pesticides protect crops from pests and diseases. They have brought about large yield increases, and have helped ensure that the rise in food production has kept well ahead of the rise in population. However, there is a growing concern about the safe use of these chemicals, and the potential dangers to farmers who use them, the environment, and consumers. There is particular concern about pesticides, since almost all chemicals that can kill pests are also potentially damaging to human health. Legislation requires that pesticide use is appropriately controlled and maximum residue levels (MRLs) not be exceeded. The level of pesticide residues in food raw materials is a measurable standard. But while residue analysis is essential for companies wishing to assure themselves that their products have been produced in accordance with best practice and within the law, it can be used to greatest effect when targeted at samples most likely to contain residues. Reliable residue analytical methods are necessary to measure the magnitude of residue in a seafood, and to enforce legal residue limits (tolerances). Sample preparation and extraction, clean up of extracts and pesticide detection are the main procedures in pesticide residue analysis. There is an interplay among these factors which should be considered in the choice of a particular method.