Developments in marine and brackishwater fish culture in Southeast Asia 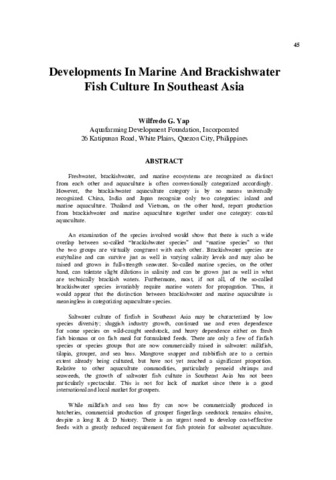 Freshwater, brackishwater, and marine ecosystems are recognized as distinct from each other and aquaculture is often conventionally categorized accordingly. However, the brackishwater aquaculture category is by no means universally recognized. China, India and Japan recognize only two categories: inland and marine aquaculture. Thailand and Vietnam, on the other hand, report production from brackishwater and marine aquaculture together under one category: coastal aquaculture. An examination of the species involved would show that there is such a wide overlap between so-called "brackishwater species" and "marine species" so that the two groups are virtually congruent with each other. Brackishwater species are euryhaline and can survive just as well in varying salinity levels and may also be raised and grown in full-strength seawater. So-called marine species, on the other hand, can tolerate slight dilutions in salinity and can be grown just as well in what are technically brackish waters. Furthermore, most, if not all, of the so-called brackishwater species invariably require marine waters for propagation. Thus, it would appear that the distinction between brackishwater and marine aquaculture is meaningless in categorizing aquaculture species. Saltwater culture of finfish in Southeast Asia may be characterized by low species diversity; sluggish industry growth, continued use and even dependence for some species on wild-caught seedstock, and heavy dependence either on fresh fish biomass or on fish meal for formulated feeds. There are only a few of finfish species or species groups that are now commercially raised in saltwater: milkfish, tilapia, grouper, and sea bass. Mangrove snapper and rabbitfish are to a certain extent aIready being cultured, but have not yet reached a significant proportion. Relative to other aquaculture commodities, particularly penaeid shrimps and seaweeds, the growth of saltwater fish culture in Southeast Asia has not been particularly spectacular. This is not for lack of market since there is a good intemational and local market for groupers. While milkfish and sea bass fry can now be commercially produced in hatcheries, commercial production of grouper fingerlings seedstock remains elusive, despite a long R & D history. There is an urgent need to develop cost-effective feeds with a greatly reduced requirement for fish protein for saltwater aquaculture.