Diagnostic and preventive practices for iridovirus in marine fish 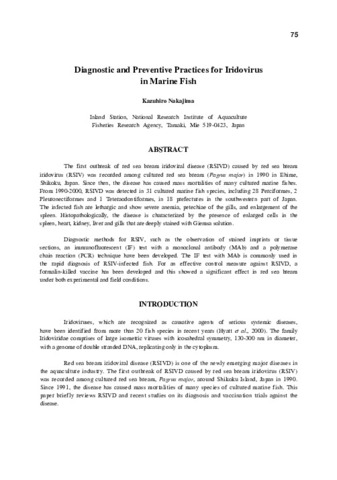 The first outbreak of red sea bream iridoviral disease (RSIVD) caused by red sea bream iridovirus (RSIV) was recorded among cultured red sea bream (Pagrus major) in 1990 in Ehime, Shikoku, Japan. Since then, the disease has caused mass mortalities of many cultured marine fishes. From 1990-2000, RSIVD was detected in 31 cultured marine fish species, including 28 Perciformes, 2 Pleuronectiformes and 1 Teteraodontiformes, in 18 prefectures in the southwestern part of Japan. The infected fish are lethargic and show severe anemia, petechiae of the gills, and enlargement of the spleen. Histopathologically, the disease is characterized by the presence of enlarged cells in the spleen, heart, kidney, liver and gills that are deeply stained with Giemsa solution. Diagnostic methods for RSIV, such as the observation of stained imprints or tissue sections, an immunofluorescent (IF) test with a monoclonal antibody (MAb) and a polymerase chain reaction (PCR) technique have been developed. The IF test with MAb is commonly used in the rapid diagnosis of RSIV-infected fish. For an effective control measure against RSIVD, a formalin-killed vaccine has been developed and this showed a significant effect in red sea bream under both experimental and field conditions.