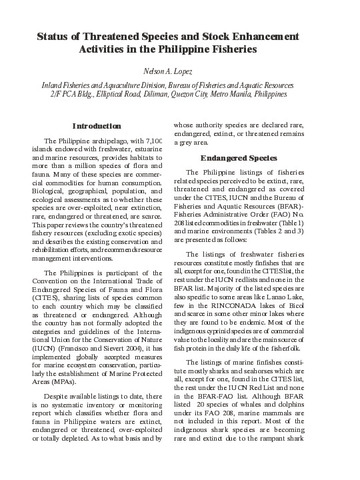 The paper provides the lists of fisheries related species perceived to be extinct, rare, threatened and endangered as covered under the CITES, IUCN and the Bureau of Fisheries and Aquatic Resources (BFAR)-Fisheries Administrative Order (FAO) No. 208. The listings of freshwater fisheries resources constitute mostly finfishes that are all, except for one, found in the CITES list, the rest under the IUCN red lists and none in the BFAR list. Majority of the listed species are also specific to some areas like Lanao Lake, few in the RINCONADA lakes of Bicol and scarce in some other minor lakes where they are found to be endemic. Most of the indigenous cyprinid species are of commercial value to the locality and are the main source of fish protein in the daily life of the fisherfolk. The listings of marine finfishes constitute mostly sharks and seahorses which are all, except for one, found in the CITES list, the rest under the IUCN Red List and none in the BFAR-FAO list. Although BFAR listed 20 species of whales and dolphins under its FAO 208, marine mammals are not included in this report. Most of the indigenous shark species are becoming rare and extinct due to the rampant shark Status of Threatened Species and Stock Enhancement Activities in the Philippine Fisheries with the rising demand of shark fins smuggled or exported abroad. These marine finfishes are distributed in coastal waters. The listings of marine gastropods, mollusks, crustaceans and echinoderms are all found in the BFAR-FAO listings as Rare, Threatened and Endangered, while few and selective under the CITES and IUCN lists. Accordingly, these are the most common marine resource commodities that are over-exploited, gleaned and gathered illegally, and frequently exported or smuggled out of the country by unscrupulous traders.