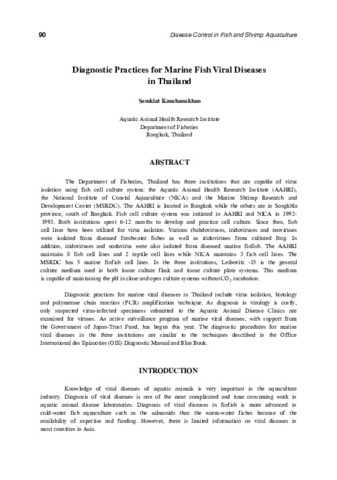 The Department of Fisheries, Thailand has three institutions that are capable of virus isolation using fish cell culture system: the Aquatic Animal Health Research Institute (AAHRI), the National Institute of Coastal Aquaculture (NICA) and the Marine Shrimp Research and Development Center (MSRDC). The AAHRI is located in Bangkok while the others are in Songkhla province, south of Bangkok. Fish cell culture system was initiated in AAHRI and NICA in 1992-1993. Both institutions spent 6-12 months to develop and practice cell culture. Since then, fish cell lines have been utilized for virus isolation. Various rhabdoviruses, iridoviruses and reoviruses were isolated from diseased freshwater fishes as well as iridoviruses from cultured frog. In addition, iridoviruses and nodavirus were also isolated from diseased marine finfish. The AAHRI maintains 8 fish cell lines and 2 reptile cell lines while NICA maintains 3 fish cell lines. The MSRDC has 5 marine finfish cell lines. In the three institutions, Leibovitz -15 is the general culture medium used in both tissue culture flask and tissue culture plate systems. This medium is capable of maintaining the pH in close and open culture systems without CO2 incubation. Diagnostic practices for marine viral diseases in Thailand include virus isolation, histology and polymerase chain reaction (PCR) amplification technique. As diagnosis in virology is costly, only suspected virus-infected specimens submitted to the Aquatic Animal Disease Clinics are examined for viruses. An active surveillance program of marine viral diseases, with support from the Government of Japan-Trust Fund, has begun this year. The diagnostic procedures for marine viral diseases in the three institutions are similar to the techniques described in the Office International des Epizooties (OIE) Diagnostic Manual and Blue Book.