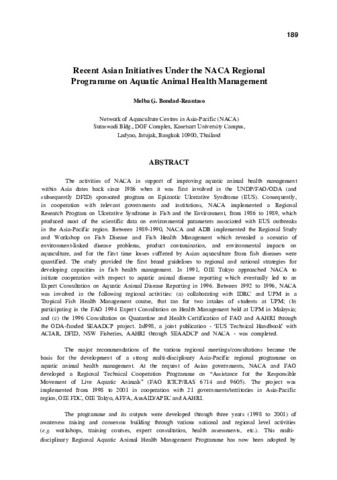 The activities of NACA in support of improving aquatic animal health management within Asia dates back since 1986 when it was first involved in the UNDP/FAO/ODA (and subsequently DFID) sponsored program on Epizootic Ulcerative Syndrome (EUS). Consequently, in cooperation with relevant governments and institutions, NACA implemented a Regional Research Program on Ulcerative Syndrome in Fish and the Environment, from 1986 to 1989, which produced most of the scientific data on environmental parameters associated with EUS outbreaks in the Asia-Pacific region. Between 1989-1990, NACA and ADB implemented the Regional Study and Workshop on Fish Disease and Fish Health Management which revealed a scenario of environment-linked disease problems, product contamination, and environmental impacts on aquaculture, and for the first time losses suffered by Asian aquaculture from fish diseases were quantified. The study provided the first broad guidelines to regional and national strategies for developing capacities in fish health management. In 1991, OIE Tokyo approached NACA to initiate cooperation with respect to aquatic animal disease reporting which eventually led to an Expert Consultation on Aquatic Animal Disease Reporting in 1996. Between 1992 to 1996, NACA was involved in the following regional activities: (a) collaborating with IDRC and UPM in a Tropical Fish Health Management course, that ran for two intakes of students at UPM; (b) participating in the FAO 1994 Expert Consultation on Health Management held at UPM in Malaysia; and (c) the 1996 Consultation on Quarantine and Health Certification of FAO and AAHRI through the ODA-funded SEAADCP project. In l998, a joint publication - 'EUS Technical Handbook' with ACIAR, DFID, NSW Fisheries, AAHRI through SEAADCP and NACA - was completed. The major recommendations of the various regional meetings/consultations became the basis for the development of a strong multi-disciplinary Asia-Pacific regional programme on aquatic animal health management. At the request of Asian governments, NACA and FAO developed a Regional Technical Cooperation Programme on "Assistance for the Responsible Movement of Live Aquatic Animals" (FAO RTCP/RAS 6714 and 9605). The project was implemented from 1998 to 2001 in cooperation with 21 governments/territories in Asia-Pacific region, OIE FDC, OIE Tokyo, AFFA, AusAID/APEC and AAHRI. The programme and its outputs were developed through three years (1998 to 2001) of awareness raising and consensus building through various national and regional level activities (e.g. workshops, training courses, expert consultation, health assessments, etc.). This multidisciplinary Regional Aquatic Animal Health Management Programme has now been adopted by Asian governments (including NACA members and participating governments within ASEAN) as an important element of NACA's Third Five Year Work Programme (2001-2005). The current thrust of the programme is to assist countries in implementing the 'Technical Guidelines', giving special emphasis to the concept of "phased implementation based on national needs", including monitoring and evaluation of its implementation. One of the mechanisms to support Asian governments in the implementation of the 'Technical Guidelines' is through regional cooperation where effective partnership with relevant organizations will be continuously established and strengthened. Designated National Coordinators will continue to be the focal points for its implementation. A Regional Advisory Group on Aquatic Animal Health has been established which will function as an official regional expert group that will ensure the provision of expert advice to Asian governments in the implementation of the 'Technical Guidelines', with NACA providing institutional support and FAO and OIE providing technical guidance. The main elements for regional cooperation include: (a) Promoting effective cooperation through regional resource centers on aquatic animal health; (b) Harmonization of procedures for health certification, quarantine and diagnostics; (c) Support to capacity building; (d) Awareness raising, communication and information exchange on aquatic animal health; (e) Regional disease reporting; (f) Emergency response; and (g) Joint activities for risk reduction in shared watersheds.The paper also briefly include other health related projects jointly being developed and/ or currently carried out by NACA with other organizations (e.g. ACIAR, APEC, ASEAN, CSIRO, DANIDA, IDRC, MPEDA, MRC and SEAFDEC-AQD).