Effects of furanace on Brachionus 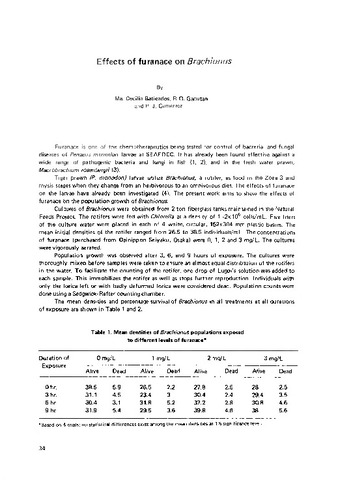 Tiger prawn P.monodon) larvae utilize Brachionus a rotifer, as food in the Zoea 3 and mysis stages when they change from an herbivorous to an omnivorous diet. The present work aims to show the effects of furanace on the population growth of Brachionus. Cultures of Brachionus were obtained and fed with Chlorella at a density of 1-2x10 SUP-6 cells/ml. Five liters of the culture water were placed in each of 4 white, circular, 152x304 mm plastic basins. The mean initial densities of the rotifer ranged from 26 . 5 to 38 . 5 individuals/ml. The concentrations of furanace were 0, 1, 2 and 3 mg /l. The cultures were vigorously aerated. Population growth was observed after 3, 6, and 9 hours of exposure. The cultures were thoroughly mixed before samples were taken to ensure an almost equal distribution of the rotifers in the water. To facilitate the counting of the rotifer, one drop of Lugol s solution was added to each sample. This immobilizes the rotifer as well as stops further reproduction. Individuals with only the lorica left or with badly deformed lorica were considered dead. Population counts were done using a Sedgwick-Rafter counting chamber. Among the different durations of exposure, the percentage survival of the populations in the furanace baths were highest after 3 hr. There were slight increases in the control and 2 mg/l and slight decreases in 1 and 3 mg/l. The differences in the mean densities are statistically insignificant at . 01 significance level. After a 6-hr exposure, the control population reached its peak density with a survival of 89%. Populations in furanace baths decreased to 88 . 5% in both 2 and 3 mg /l followed closely by 87% in 1 mg/l. Again, no statistical differences exist among all the levels. The mean percentage survival in 1 and 2 mg/l increased (89% and 91%, respectively) after a 9-hr expsoure, while those in the control and 3 mg/l decreased to 86 . 5% and 88 . 25%, respectively. There were no marked differences in appearance noted among the individuals in furanace baths and those in the control.