Reduction in Chaetoceros populations by furanace 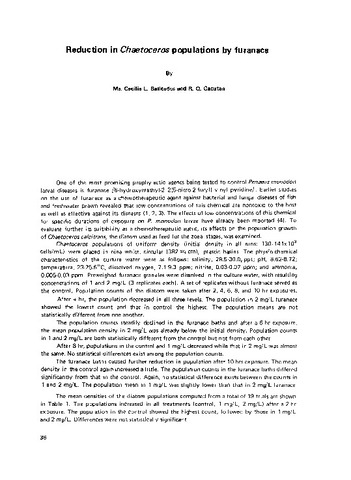 One of the most promising prophylactic agents being tested to control Penaeus monodon larval diseases is furanace (6-hydroxymethyl-2 2(5-nitro-2-furyl) vinyl pyridine). To evaluate further its suitability as a chemotherapeutic agent, its effects on the population growth of Chaetoceros calcitrans, the diatom used as feed for the zoeal stages, was examined. Chaetoceros populations of uniform density (initial density in all runs: 130-141x10 -3 cells /ml) were placed in nine white, circular (382 sq cm), plastic basins. The physio-chemical characteristics of the culture water were as follows: salinity, 28 . 5-30 . 0 ppt; pH, 8 . 62-8 . 72; temperature, 23-25 . 5 degree C; dissolved oxygen, 7 . 1-9 . 3 ppm; nitrate, 0 . 03-0 . 07 ppm; and ammonia, 0 . 005-0 . 03 ppm. Preweighed furanace granules were dissolved in the culture water, with resulting concentrations of 1 and 2 mg/l (3 replicates each). A set of replicates without furanace served as the control. Population counts of the diatom were taken after 2, 4, 6, 8, and 10 hr exposures. After 4 hr, the population decreased in all three levels. The population in 2 mg/l furanace showed the lowest count and that in control the highest. The population means are not statistically different from one another. The results of the study show that the furanace causes reductions in Chaetoceros population at all durations of exposure.