Biology and farming of the green mussel Mytilus smaragdinus 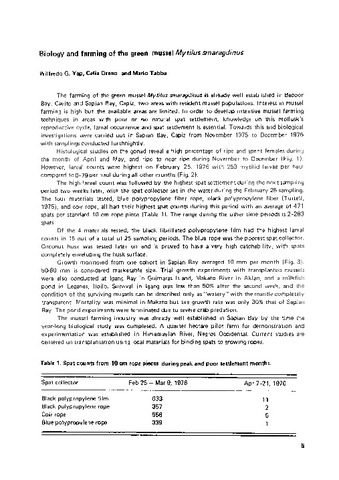 Biological investigations were carried out in Sapian Bay, Capiz from November 1975 to December 1976 with samplings conducted fortnightly. Histological studies on the gonad reveal a high percentage of ripe and spent females during the month of April and May, and ripe to near ripe during November to December. However, larval counts were highest on February 25, 1976 with 253 mytilid larvae per haul compared to 0-79 per haul during all other months. The high larval count was followed by the highest spat settlement during the next sampling period two weeks later, with the spat collector set in the water during the February 25 sampling. The four materials tested, blue polypropylene fiber rope, black polypropylene fiber, and coir rope, all had their highest spat counts during this period with an average of 471 spats per standard 10 cm rope piece. The range during the other time periods is 2-283 spats. Of the 4 materials tested, the black fibrillated polypropylene film had the highest larval counts in 15 out of a total of 25 sampling periods. The blue rope was the poorest spat collector. Coconut husk was tested later on and it proved to have a very high catchability, with spats completely enveloping the husk surface. Growth monitored from one cohort in Sapian Bay averaged 10 mm per month. 50-60 mm is considered marketable size. Trial growth experiments with transplanted mussels were also conducted at Igang Bay in Guimaras Island, Makato River in Aklan, and a milkfish pond in Leganes, Iloilo. Survival in Igang was less than 50% after the second week, and the condition of the surviving mussels can be described only as watery with the mantle completely transparent. Mortality was minimal in Makato but the growth rate was only 30% that of Sapian Bay. The pond experiments were terminated due to severe crab predation.