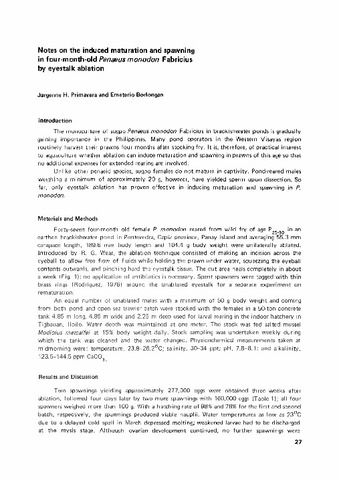 The ablation technique consisted of making an incision across the eyeball to allow free flow of fluids while holding the prawn under water, squeezing the eyeball contents outwards, and pinching hard the eyestalk tissue. The cut area heals completely in about a week; no application of antibiotics is necessary. Spent spawners were tagged with thin brass rings (Rodriguez, 1976) around the unablated eyestalk for a separate experiment on rematuration. Two spawning yielding approximately 277,000 eggs were obtained three weeks after ablation, followed four days later by two more spawnings with 160,000 eggs; all four spawners weighed more than 100 g. With a hatching rate of 98% and 78% for the first and second batch, respectively, the spawnings produced viable nauplii. Water temperatures as low as 23°C due to a delayed cold spell in March depressed molting; weakened larvae had to be discharged at the mysis stage. Although ovarian development continued, no further spawnings were obtained due mainly to the onset of bacterial and fungal disease. Infection is initiated in injured portions of the exoskeleton, sometimes penetrating right through the muscles to the ovarian tissues. The non-flowthrough conditions and mussel meat feeding led to fouling of the culture water resulting in consecutive mortalities caused by disease. Female P.monodon held in maturation pens were ablated at the age of 15 months (Santiago, et al., 1976); they averaged only 16 g body weight after four months growth in ponds. In another experiment, pond-reared P.monodon females ranging from 50 to 80 g were ablated at approximately seven months (Aquacop, 1977). The present results show a minimum age of four months from postlarve that P.monodon is capable of ovarian development and spawning upon ablation. However, maturation is probably affected by size as well as age - the four-month old females weighed an average of 100 g in contrast to the smaller animals in the earlier experiments.