An experimental assessment of the aquaculture potential of the brown mussel, Modiolus metcalfei 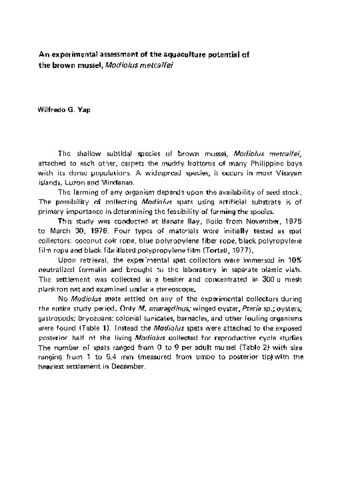 A study was conducted at Banate Bay, Iloilo, from November 1975 to March 1976. Trials were conducted using spat collectors of four types, but no Modiolus metcalfei spat settled on any of the experimental collectors during the entire study period. Instead they attached to the exposed posterior half of the living Modiolus collected for reproductive cycle studies. The aquaculture potential of the brown mussel is considered to be low. Improvement of its production potential should be approached along the line of resource management rather than aquaculture. This management should be aimed at two objectives: (1) maintenance of enough adults on settlement surfaces, and (2) provision of space to allow new recruitments to grow. A possible solution, therefore, is controlled harvesting or thinning after the peak in the settlement season. In this manner, the chances of the mussel bed recovering year after year may be enhanced.