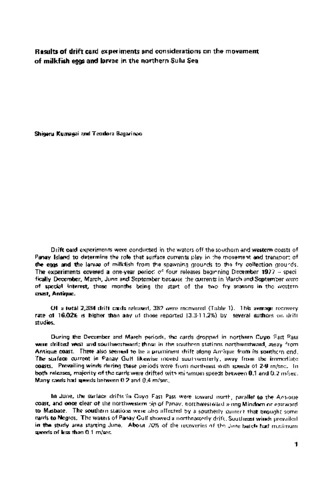 For a period of one year beginning December 1977, drift card experiments were conducted off the western and southern coasts of Panay Island to determine the surface currents in the area. Of a total 2,384 drift cards released during the study, 382 (16.02%) were recovered, 92% of them within 30 days following dispatch. The surface currents in the study area are strongly influenced, in direction and speed, by the prevailing monsoon winds. During the NE monsoon period, the surface currents move away from the coast; during the SW monsoon, toward and/or parallel to the coast. Based on the results, the probable movement and transport of milkfish (chanos chanos) eggs and larvae from the spawning ground to the fry collection ground are also discussed.