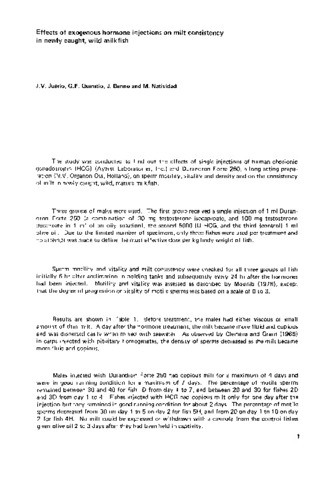 A study was conducted to determine the effects of single injections of human chorionic gonadotropin (HCG) and Durandron Forte 250 on sperm motility, vitality and density and also on the consistency of milt in newly caught, wild, mature milkfish (Chanos chanos). In contrast to HCG, single injections of Durandron Forte 250 were effective not only in inducing spermiation but also in maintaining newly caught mature males in good running condition for a maximum of 7 days, despite daily handling and collection of approximately 3ml milt.