A review of maturation and reproduction in closed thelycum penaeids 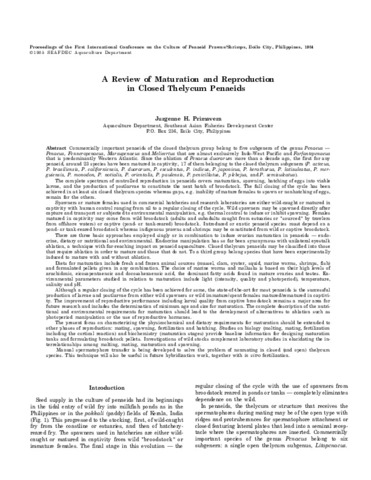 Commercially important penaeids of the closed thelycum group belong to five subgenera of the genus Penaeus — Penaeus, Fenneropenaeus, Marsupenaeus and Melicertus that are almost exclusively Indo-West Pacific and Farfantepenaeus that is predominantly Western Atlantic. Since the ablation of Penaeus duorarum more than a decade ago, the first for any penaeid, around 23 species have been matured in captivity, 17 of them belonging to the closed thelycum subgenera (P. aztecus, P. brasiliensis, P. californiensis, P. duorarum, P. esculentus, P. indicus, P. japonicus, P. kerathurus, P. latisulcatus, P. merguiensis, P. monodon, P. notialis, P. orientalis, P. paulensis, P. penicillatus, P. plebejus, and P. semisulcatus). The complete spectrum of controlled reproduction in penaeids covers maturation, spawning, hatching of eggs into viable larvae, and the production of postlarvae to constitute the next batch of broodstock. The full closing of the cycle has been achieved in at least six closed thelycum species whereas gaps, e.g. inability of mature females to spawn or nonhatching of eggs, remain for the others. Spawners or mature females used in commercial hatcheries and research laboratories are either wild-caught or matured in captivity with human control ranging from nil to a regular closing of the cycle. Wild spawners may be spawned directly after capture and transport or subjected to environmental manipulation, e.g. thermal control to induce or inhibit spawning. Females matured in captivity may come from wild broodstock (adults and subadults caught from estuaries or "sourced" by trawlers from offshore waters) or captive (pond- or tank-reared) broodstock. Introduced or exotic penaeid species must depend on a pond- or tank-reared broodstock whereas indigenous prawns and shrimps may be constituted from wild or captive broodstock. There are three basic approaches employed singly or in combination to induce ovarian maturation in penaeids — endocrine, dietary or nutritional and environmental. Endocrine manipulation has so far been synonymous with unilateral eyestalk ablation, a technique with far-reaching impact on penaeid aquaculture. Closed thelycum penaeids may be classified into those that require ablation in order to mature and those that do not. To a third group belong species that have been experimentally induced to mature with and without ablation. Diets for maturation include fresh and frozen animal sources (mussel, clam, oyster, squid, marine worms, shrimps, fish) and formulated pellets given in any combination. The choice of marine worms and mollusks is based on their high levels of arachidonic, eicosapentaenoic and docosahexaenoic acid, the dominant fatty acids found in mature ovaries and testes. Environmental parameters studied in relation to maturation include light (intensity, quality and photoperiod), temperature, salinity and pH. Although a regular closing of the cycle has been achieved for some, the state-of-the-art for most penaeids is the successful production of larvae and postlarvae from either wild spawners or wild immature/spent females matured/rematured in captivity. The improvement of reproductive performance including larval quality from captive broodstock remains a major area for future research and includes the determination of minimum age and size for maturation. The complete description of the nutritional and environmental requirements for maturation should lead to the development of alternatives to ablation such as photoperiod manipulation or the use of reproductive hormones. The present focus on characterizing the physicochemical and dietary requirements for maturation should be extended to other phases of reproduction: mating, spawning, fertilization and hatching. Studies on biology (molting, mating, fertilization including the cortical reaction) and biochemistry (maturation stages) provide baseline information for designing maturation tanks and formulating broodstock pellets. Investigations of wild stocks complement laboratory studies in elucidating the interrelationships among molting, mating, maturation and spawning. Manual spermatophore transfer is being developed to solve the problem of nonmating in closed (and open) thelycum species. This technique will also be useful in future hybridization work, together with in vitro fertilization.