Marine biodiversity at the SEAFDEC/AQD research stations in Iloilo and Guimaras, Philippines 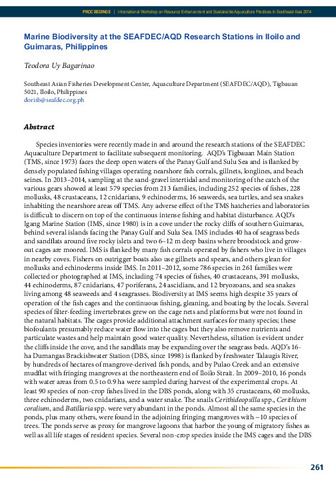 Species inventories were recently made in and around the research stations of the SEAFDEC Aquaculture Department to facilitate subsequent monitoring. AQD s Tigbauan Main Station (TMS, since 1973) faces the deep open waters of the Panay Gulf and Sulu Sea and is flanked by densely populated fishing villages operating nearshore fish corrals, gillnets, longlines, and beach seines. In 2013 2014, sampling at the sand-gravel intertidal and monitoring of the catch of the various gears showed at least 579 species from 213 families, including 252 species of fishes, 228 mollusks, 48 crustaceans, 12 cnidarians, 9 echinoderms, 16 seaweeds, sea turtles, and sea snakes inhabiting the nearshore areas off TMS. Any adverse effect of the TMS hatcheries and laboratories is difficult to discern on top of the continuous intense fishing and habitat disturbance. AQD s Igang Marine Station (IMS, since 1980) is in a cove under the rocky cliffs of southern Guimaras, behind several islands facing the Panay Gulf and Sulu Sea. IMS includes 40 ha of seagrass beds and sandflats around five rocky islets and two 6 12 m deep basins where broodstock and growout cages are moored. IMS is flanked by many fish corrals operated by fishers who live in villages in nearby coves. Fishers on outrigger boats also use gillnets and spears, and others glean for mollusks and echinoderms inside IMS. In 2011 2012, some 786 species in 261 families were collected or photographed at IMS, including 74 species of fishes, 40 crustaceans, 391 mollusks, 44 echinoderms, 87 cnidarians, 47 poriferans, 24 ascidians, and 12 bryozoans, and sea snakes living among 48 seaweeds and 4 seagrasses. Biodiversity at IMS seems high despite 35 years of operation of the fish cages and the continuous fishing, gleaning, and boating by the locals. Several species of filter-feeding invertebrates grew on the cage nets and platforms but were not found in the natural habitats. The cages provide additional attachment surfaces for many species; these biofoulants presumably reduce water flow into the cages but they also remove nutrients and particulate wastes and help maintain good water quality. Nevertheless, siltation is evident under the cliffs inside the cove, and the sandflats may be expanding over the seagrass beds. AQD s 16ha Dumangas Brackishwater Station (DBS, since 1998) is flanked by freshwater Talaugis River, by hundreds of hectares of mangrove-derived fish ponds, and by Pulao Creek and an extensive mudflat with fringing mangroves at the northeastern end of Iloilo Strait. In 2009 2010, 16 ponds with water areas from 0.5 to 0.9 ha were sampled during harvest of the experimental crops. At least 90 species of non-crop fishes lived in the DBS ponds, along with 35 crustaceans, 60 mollusks, three echinoderms, two cnidarians, and a water snake. The snails Cerithideopsilla spp., Cerithium coralium, and Batillaria spp. were very abundant in the ponds. Almost all the same species in the ponds, plus many others, were found in the adjoining fringing mangroves with ~10 species of trees. The ponds serve as proxy for mangrove lagoons that harbor the young of migratory fishes as well as all life stages of resident species. Several non-crop species inside the IMS cages and the DBS ponds are harvested by the pond workers and contribute to nutrition and income. Aquaculture farms should be managed for high biodiversity to ensure sustainability. Ways are suggested for SEAFDEC/AQD to do so at its aquaculture research stations.