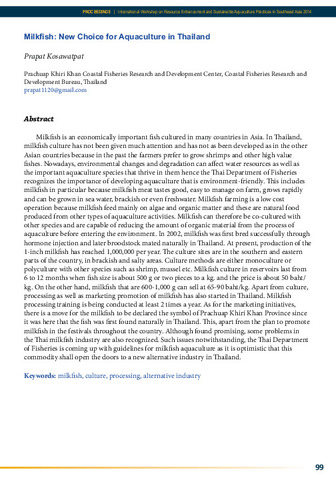 Milkfish is an economically important fish cultured in many countries in Asia. In Thailand, milkfish culture has not been given much attention and has not as been developed as in the other Asian countries because in the past the farmers prefer to grow shrimps and other high value fishes. Nowadays, environmental changes and degradation can affect water resources as well as the important aquaculture species that thrive in them hence the Thai Department of Fisheries recognizes the importance of developing aquaculture that is environment-friendly. This includes milkfish in particular because milkfish meat tastes good, easy to manage on farm, grows rapidly and can be grown in sea water, brackish or even freshwater. Milkfish farming is a low cost operation because milkfish feed mainly on algae and organic matter and these are natural food produced from other types of aquaculture activities. Milkfish can therefore be co-cultured with other species and are capable of reducing the amount of organic material from the process of aquaculture before entering the environment. In 2002, milkfish was first bred successfully through hormone injection and later broodstock mated naturally in Thailand. At present, production of the 1-inch milkfish has reached 1,000,000 per year. The culture sites are in the southern and eastern parts of the country, in brackish and salty areas. Culture methods are either monoculture or polyculture with other species such as shrimp, mussel etc. Milkfish culture in reservoirs last from 6 to 12 months when fish size is about 500 g or two pieces to a kg. and the price is about 50 baht/ kg. On the other hand, milkfish that are 600-1,000 g can sell at 65-90 baht/kg. Apart from culture, processing as well as marketing promotion of milkfish has also started in Thailand. Milkfish processing training is being conducted at least 2 times a year. As for the marketing initiatives, there is a move for the milkfish to be declared the symbol of Prachuap Khiri Khan Province since it was here that the fish was first found naturally in Thailand. This, apart from the plan to promote milkfish in the festivals throughout the country. Although found promising, some problems in the Thai milkfish industry are also recognized. Such issues notwithstanding, the Thai Department of Fisheries is coming up with guidelines for milkfish aquaculture as it is optimistic that this commodity shall open the doors to a new alternative industry in Thailand.