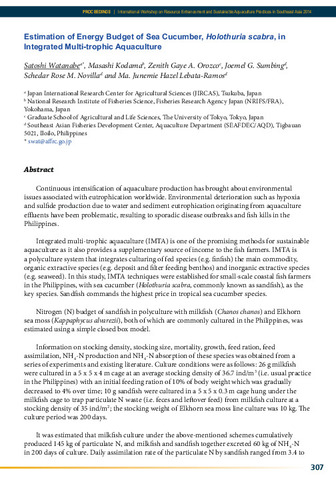 Continuous intensification of aquaculture production has brought about environmental issues associated with eutrophication worldwide. Environmental deterioration such as hypoxia and sulfide production due to water and sediment eutrophication originating from aquaculture effluents have been problematic, resulting to sporadic disease outbreaks and fish kills in the Philippines. Integrated multi-trophic aquaculture (IMTA) is one of the promising methods for sustainable aquaculture as it also provides a supplementary source of income to the fish farmers. IMTA is a polyculture system that integrates culturing of fed species (e.g. finfish) the main commodity, organic extractive species (e.g. deposit and filter feeding benthos) and inorganic extractive species (e.g. seaweed). In this study, IMTA techniques were established for small-scale coastal fish farmers in the Philippines, with sea cucumber (Holothuria scabra, commonly known as sandfish), as the key species. Sandfish commands the highest price in tropical sea cucumber species. Nitrogen (N) budget of sandfish in polyculture with milkfish (Chanos chanos) and Elkhorn sea moss (Kappaphycus alvarezii), both of which are commonly cultured in the Philippines, was estimated using a simple closed box model. Information on stocking density, stocking size, mortality, growth, feed ration, feed assimilation, NH4-N production and NH4-N absorption of these species was obtained from a series of experiments and existing literature. Culture conditions were as follows: 26 g milkfish were cultured in a 5 x 5 x 4 m cage at an average stocking density of 36.7 ind/m3 (i.e. usual practice in the Philippines) with an initial feeding ration of 10% of body weight which was gradually decreased to 4% over time; 10 g sandfish were cultured in a 5 x 5 x 0.3 m cage hung under the milkfish cage to trap particulate N waste (i.e. feces and leftover feed) from milkfish culture at a stocking density of 35 ind/m2; the stocking weight of Elkhorn sea moss line culture was 10 kg. The culture period was 200 days. It was estimated that milkfish culture under the above-mentioned schemes cumulatively produced 145 kg of particulate N, and milkfish and sandfish together excreted 60 kg of NH4-N in 200 days of culture. Daily assimilation rate of the particulate N by sandfish ranged from 3.4 to 12.4%, and 6.4% of the particulate N was estimated to be removed by sandfish during the entire 200 days of culture. Daily absorption rate of NH4-N by Elkhorn sea moss increased exponentially with time and reached 100% at 125 days of culture. Cumulative NH4-N from milkfish and sandfish excretion was estimated to be depleted by 162 days of culture. For complete utilization of particulate N by sandfish by the end of milkfish culture period (i.e. zero emission), sandfish stocking density should be 805 ind/m2, which is 200 times as high as that in existing sandfish aquaculture operations in countries such as Viet Nam and New Caledonia. The purpose of sandfish culture in IMTA should be emphasized in terms of its economic advantages and not very much on environmental integrity. Cages for sandfish culture should be designed in such a way where only a small fraction of organic matter from milkfish culture (i.e. about 6% in this culture scheme) enters it to avoid sediment quality deterioration and possible death of sandfish. Elkhorn sea moss on the other hand seems very efficient in bioremediation capability.