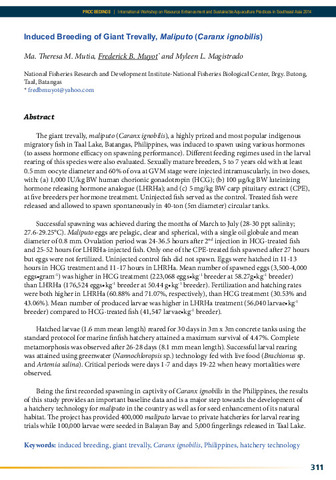 The giant trevally, maliputo (Caranx ignobilis), a highly prized and most popular indigenous migratory fish in Taal Lake, Batangas, Philippines, was induced to spawn using various hormones (to assess hormone efficacy on spawning performance). Different feeding regimes used in the larval rearing of this species were also evaluated. Sexually mature breeders, 5 to 7 years old with at least 0.5 mm oocyte diameter and 60% of ova at GVM stage were injected intramuscularly, in two doses, with: (a) 1,000 IU/kg BW human chorionic gonadotropin (HCG); (b) 100 µg/kg BW luteinizing hormone releasing hormone analogue (LHRHa); and (c) 5 mg/kg BW carp pituitary extract (CPE), at five breeders per hormone treatment. Uninjected fish served as the control. Treated fish were released and allowed to spawn spontaneously in 40-ton (5m diameter) circular tanks. Successful spawning was achieved during the months of March to July (28-30 ppt salinity; 27.6-29.25°C). Maliputo eggs are pelagic, clear and spherical, with a single oil globule and mean diameter of 0.8 mm. Ovulation period was 24-36.5 hours after 2nd injection in HCG-treated fish and 25-52 hours for LHRHa-injected fish. Only one of the CPE-treated fish spawned after 27 hours but eggs were not fertilized. Uninjected control fish did not spawn. Eggs were hatched in 11-13 hours in HCG treatment and 11-17 hours in LHRHa. Mean number of spawned eggs (3,500-4,000 eggs•gram-1) was higher in HCG treatment (223,068 eggs•kg-1 breeder at 58.27g•kg-1 breeder) than LHRHa (176,524 eggs•kg-1 breeder at 50.44 g•kg-1 breeder). Fertilization and hatching rates were both higher in LHRHa (60.88% and 71.07%, respectively), than HCG treatment (30.53% and 43.06%). Mean number of produced larvae was higher in LHRHa treatment (56,040 larvae•kg-1 breeder) compared to HCG-treated fish (41,547 larvae•kg-1 breeder). Hatched larvae (1.6 mm mean length) reared for 30 days in 3m x 3m concrete tanks using the standard protocol for marine finfish hatchery attained a maximum survival of 4.47%. Complete metamorphosis was observed after 26-28 days (8.1 mm mean length). Successful larval rearing was attained using greenwater (Nannochloropsis sp.) technology fed with live food (Brachionus sp. and Artemia salina). Critical periods were days 1-7 and days 19-22 when heavy mortalities were observed. Being the first recorded spawning in captivity of Caranx ignobilis in the Philippines, the results of this study provides an important baseline data and is a major step towards the development of a hatchery technology for maliputo in the country as well as for seed enhancement of its natural habitat. The project has provided 400,000 maliputo larvae to private hatcheries for larval rearing trials while 100,000 larvae were seeded in Balayan Bay and 5,000 fingerlings released in Taal Lake.