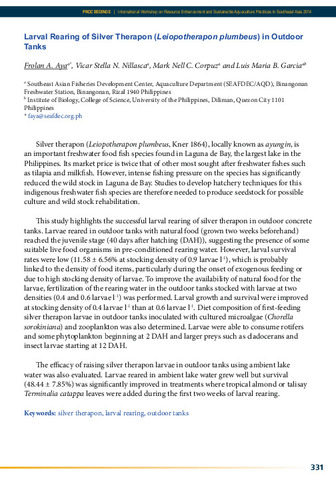 Silver therapon (Leiopotherapon plumbeus, Kner 1864), locally known as ayungin, is an important freshwater food fish species found in Laguna de Bay, the largest lake in the Philippines. Its market price is twice that of other most sought after freshwater fishes such as tilapia and milkfish. However, intense fishing pressure on the species has significantly reduced the wild stock in Laguna de Bay. Studies to develop hatchery techniques for this indigenous freshwater fish species are therefore needed to produce seedstock for possible culture and wild stock rehabilitation. This study highlights the successful larval rearing of silver therapon in outdoor concrete tanks. Larvae reared in outdoor tanks with natural food (grown two weeks beforehand) reached the juvenile stage (40 days after hatching (DAH)), suggesting the presence of some suitable live food organisms in pre-conditioned rearing water. However, larval survival rates were low (11.58 ± 6.56% at stocking density of 0.9 larvae l-1), which is probably linked to the density of food items, particularly during the onset of exogenous feeding or due to high stocking density of larvae. To improve the availability of natural food for the larvae, fertilization of the rearing water in the outdoor tanks stocked with larvae at two densities (0.4 and 0.6 larvae l-1) was performed. Larval growth and survival were improved at stocking density of 0.4 larvae l-1 than at 0.6 larvae l-1. Diet composition of first-feeding silver therapon larvae in outdoor tanks inoculated with cultured microalgae (Chorella sorokiniana) and zooplankton was also determined. Larvae were able to consume rotifers and some phytoplankton beginning at 2 DAH and larger preys such as cladocerans and insect larvae starting at 12 DAH. The efficacy of raising silver therapon larvae in outdoor tanks using ambient lake water was also evaluated. Larvae reared in ambient lake water grew well but survival (48.44 ± 7.85%) was significantly improved in treatments where tropical almond or talisay Terminalia catappa leaves were added during the first two weeks of larval rearing.