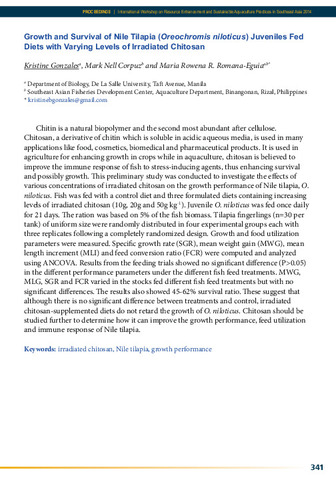 Chitin is a natural biopolymer and the second most abundant after cellulose. Chitosan, a derivative of chitin which is soluble in acidic aqueous media, is used in many applications like food, cosmetics, biomedical and pharmaceutical products. It is used in agriculture for enhancing growth in crops while in aquaculture, chitosan is believed to improve the immune response of fish to stress-inducing agents, thus enhancing survival and possibly growth. This preliminary study was conducted to investigate the effects of various concentrations of irradiated chitosan on the growth performance of Nile tilapia, O. niloticus. Fish was fed with a control diet and three formulated diets containing increasing levels of irradiated chitosan (10g, 20g and 50g kg-1). Juvenile O. niloticus was fed once daily for 21 days. The ration was based on 5% of the fish biomass. Tilapia fingerlings (n=30 per tank) of uniform size were randomly distributed in four experimental groups each with three replicates following a completely randomized design. Growth and food utilization parameters were measured. Specific growth rate (SGR), mean weight gain (MWG), mean length increment (MLI) and feed conversion ratio (FCR) were computed and analyzed using ANCOVA. Results from the feeding trials showed no significant difference (P>0.05) in the different performance parameters under the different fish feed treatments. MWG, MLG, SGR and FCR varied in the stocks fed different fish feed treatments but with no significant differences. The results also showed 45-62% survival ratio. These suggest that although there is no significant difference between treatments and control, irradiated chitosan-supplemented diets do not retard the growth of O. niloticus. Chitosan should be studied further to determine how it can improve the growth performance, feed utilization and immune response of Nile tilapia.