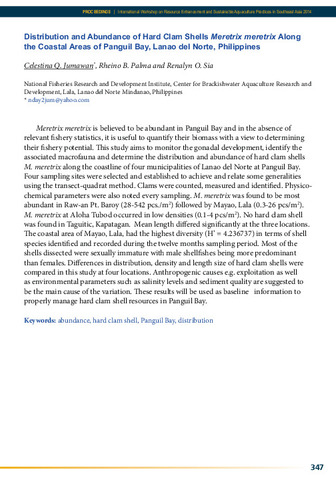 Meretrix meretrix is believed to be abundant in Panguil Bay and in the absence of relevant fishery statistics, it is useful to quantify their biomass with a view to determining their fishery potential. This study aims to monitor the gonadal development, identify the associated macrofauna and determine the distribution and abundance of hard clam shells M. meretrix along the coastline of four municipalities of Lanao del Norte at Panguil Bay. Four sampling sites were selected and established to achieve and relate some generalities using the transect-quadrat method. Clams were counted, measured and identified. Physicochemical parameters were also noted every sampling. M. meretrix was found to be most abundant in Raw-an Pt. Baroy (28-542 pcs./m2) followed by Mayao, Lala (0.3-26 pcs/m2). M. meretrix at Aloha Tubod occurred in low densities (0.1-4 pcs/m2). No hard clam shell was found in Taguitic, Kapatagan. Mean length differed significantly at the three locations. The coastal area of Mayao, Lala, had the highest diversity (H' = 4.236737) in terms of shell species identified and recorded during the twelve months sampling period. Most of the shells dissected were sexually immature with male shellfishes being more predominant than females. Differences in distribution, density and length size of hard clam shells were compared in this study at four locations. Anthropogenic causes e.g. exploitation as well as environmental parameters such as salinity levels and sediment quality are suggested to be the main cause of the variation. These results will be used as baseline information to properly manage hard clam shell resources in Panguil Bay.