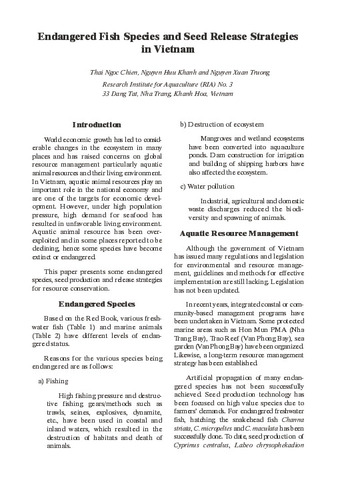 World economic growth has led to considerable changes in the ecosystem in many places and has raised concerns on global resource management particularly aquatic animal resources and their living environment. In Vietnam, aquatic animal resources play an important role in the national economy and are one of the targets for economic development. However, under high population pressure, high demand for seafood has resulted in unfavorable living environment. Aquatic animal resource has been over-exploited and in some places reported to be declining; hence some species have become extinct or endangered. This paper provides a list some endangered freshwater, brackishwater, and marine species. Moreover, the seed production activities and the release strategies for resource conservation of the government of Vietnam are also presented.