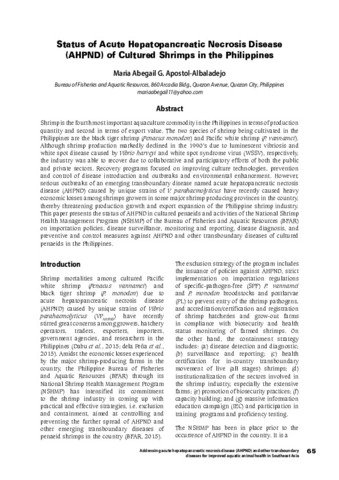 Shrimp is the fourth most important aquaculture commodity in the Philippines in terms of production quantity and second in terms of export value. The two species of shrimp being cultivated in the Philippines are the black tiger shrimp (Penaeus monodon) and Pacific white shrimp (P. vannamei). Although shrimp production markedly declined in the 1990 s due to luminescent vibriosis and white spot disease caused by Vibrio harveyi and white spot syndrome virus (WSSV), respectively, the industry was able to recover due to collaborative and participatory efforts of both the public and private sectors. Recovery programs focused on improving culture technologies, prevention and control of disease introduction and outbreaks and environmental enhancement. However, serious outbreaks of an emerging transboundary disease named acute hepatopancreatic necrosis disease (AHPND) caused by unique strains of V. parahaemolyticus have recently caused heavy economic losses among shrimps growers in some major shrimp producing provinces in the country, thereby threatening production growth and export expansion of the Philippine shrimp industry. This paper presents the status of AHPND in cultured penaeids and activities of the National Shrimp Health Management Program (NSHMP) of the Bureau of Fisheries and Aquatic Resources (BFAR) on importation policies, disease surveillance, monitoring and reporting, disease diagnosis, and preventive and control measures against AHPND and other transboundary diseases of cultured penaeids in the Philippines.