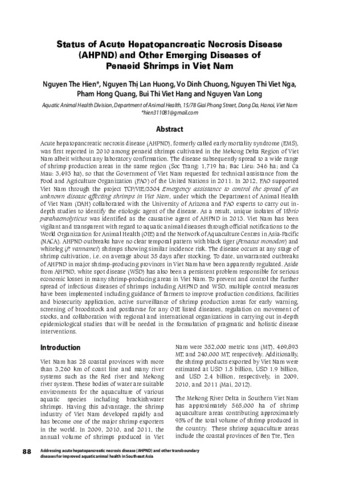 Acute hepatopancreatic necrosis disease (AHPND), formerly called early mortality syndrome (EMS), was first reported in 2010 among penaeid shrimps cultivated in the Mekong Delta Region of Viet Nam albeit without any laboratory confirmation. The disease subsequently spread to a wide range of shrimp production areas in the same region (Soc Trang: 1,719 ha; Bac Lieu: 346 ha; and Ca Mau: 3,493 ha), so that the Government of Viet Nam requested for technical assistance from the Food and Agriculture Organization (FAO) of the United Nations in 2011. In 2012, FAO supported Viet Nam through the project TCP/VIE/3304 Emergency assistance to control the spread of an unknown disease affecting shrimps in Viet Nam, under which the Department of Animal Health of Viet Nam (DAH) collaborated with the University of Arizona and FAO experts to carry out indepth studies to identify the etiologic agent of the disease. As a result, unique isolates of Vibrio parahaemolyticus was identified as the causative agent of AHPND in 2013. Viet Nam has been vigilant and transparent with regard to aquatic animal diseases through official notifications to the World Organization for Animal Health (OIE) and the Network of Aquaculture Centres in Asia-Pacific (NACA). AHPND outbreaks have no clear temporal pattern with black tiger (Penaeus monodon) and whiteleg (P. vannamei) shrimps showing similar incidence risk. The disease occurs at any stage of shrimp cultivation, i.e. on average about 35 days after stocking. To date, unwarranted outbreaks of AHPND in major shrimp-producing provinces in Viet Nam have been apparently regulated. Aside from AHPND, white spot disease (WSD) has also been a persistent problem responsible for serious economic losses in many shrimp-producing areas in Viet Nam. To prevent and control the further spread of infectious diseases of shrimps including AHPND and WSD, multiple control measures have been implemented including guidance of farmers to improve production conditions, facilities and biosecurity application, active surveillance of shrimp production areas for early warning, screening of broodstock and postlarvae for any OIE listed diseases, regulation on movement of stocks, and collaboration with regional and international organizations in carrying out in-depth epidemiological studies that will be needed in the formulation of pragmatic and holistic disease interventions.