Evaluation of the bioremediation capacity of the polychaete, Marphysa mossambica (Peters, 1854) in pond sediments 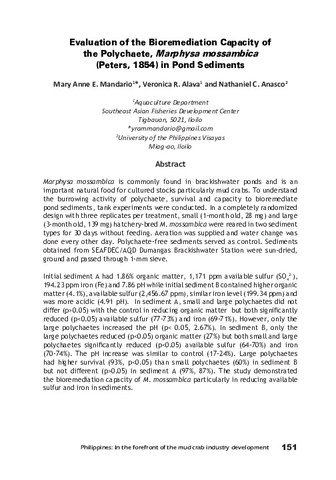 Marphysa mossambica is commonly found in brackishwater ponds and is an important natural food for cultured stocks particularly mud crabs. To understand the burrowing activity of polychaete, survival and capacity to bioremediate pond sediments, tank experiments were conducted. In a completely randomized design with three replicates per treatment, small (1-month old, 28 mg) and large (3-month old, 139 mg) hatchery-bred M. mossambica were reared in two sediment types for 30 days without feeding. Aeration was supplied and water change was done every other day. Polychaete-free sediments served as control. Sediments obtained from SEAFDEC/AQD Dumangas Brackishwater Station were sun-dried, ground and passed through 1-mm sieve. Initial sediment A had 1.86% organic matter, 1,171 ppm available sulfur (SO42-), 194.23 ppm iron (Fe) and 7.86 pH while initial sediment B contained higher organic matter (4.1%), available sulfur (2,456.67 ppm), similar iron level (199.34 ppm) and was more acidic (4.91 pH). In sediment A, small and large polychaetes did not differ (p>0.05) with the control in reducing organic matter but both significantly reduced (p<0.05) available sulfur (77-73%) and iron (69-71%). However, only the large polychaetes increased the pH (p< 0.05, 2.67%). In sediment B, only the large polychaetes reduced (p<0.05) organic matter (27%) but both small and large polychaetes significantly reduced (p<0.05) available sulfur (64-70%) and iron (70-74%). The pH increase was similar to control (17-24%). Large polychaetes had higher survival (93%, p<0.05) than small polychaetes (60%) in sediment B but not different (p>0.05) in sediment A (97%, 87%). The study demonstrated the bioremediation capacity of M. mossambica particularly in reducing available sulfur and iron in sediments.