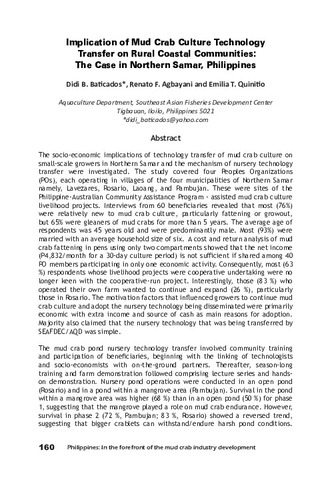 The socio-economic implications of technology transfer of mud crab culture on small-scale growers in Northern Samar and the mechanism of nursery technology transfer were investigated. The study covered four Peoples Organizations (POs), each operating in villages of the four municipalities of Northern Samar namely, Lavezares, Rosario, Laoang, and Pambujan. These were sites of the Philippine-Australian Community Assistance Program - assisted mud crab (Scylla) culture livelihood projects. Interviews from 60 beneficiaries revealed that most (76%) were relatively new to mud crab culture, particularly fattening or growout, but 65% were gleaners of mud crabs for more than 5 years. The average age of respondents was 45 years old and were predominantly male. Most (93%) were married with an average household size of six. A cost and return analysis of mud crab fattening in pens using only two compartments showed that the net income (P4,832/month for a 30-day culture period) is not sufficient if shared among 40 PO members participating in only one economic activity. Consequently, most (63 %) respondents whose livelihood projects were cooperative undertaking were no longer keen with the cooperative-run project. Interestingly, those (83 %) who operated their own farm wanted to continue and expand (26 %), particularly those in Rosario. The motivation factors that influenced growers to continue mud crab culture and adopt the nursery technology being disseminated were primarily economic with extra income and source of cash as main reasons for adoption. Majority also claimed that the nursery technology that was being transferred by SEAFDEC/AQD was simple.The mud crab pond nursery technology transfer involved community training and participation of beneficiaries, beginning with the linking of technologists and socio-economists with on-the-ground partners. Thereafter, season-long training and farm demonstration followed comprising lecture series and hands-on demonstration. Nursery pond operations were conducted in an open pond (Rosario) and in a pond within a mangrove area (Pambujan). Survival in the pond within a mangrove area was higher (68 %) than in an open pond (50 %) for phase 1, suggesting that the mangrove played a role on mud crab endurance. However, survival in phase 2 (72 %, Pambujan; 83 %, Rosario) showed a reversed trend, suggesting that bigger crablets can withstand/endure harsh pond conditions.Results of the demonstration indicated that the nursery technology is a viable enterprise, showing an ROI of 93.50% in Rosario and 198.04% in Pambujan. Most (83%) of the growers were interested in the nursery technology, although only few PO members participated in the season-long training. Ownership of area, market, and farm distance from household were the more important considerations that influenced small-scale growers in adopting the technology.