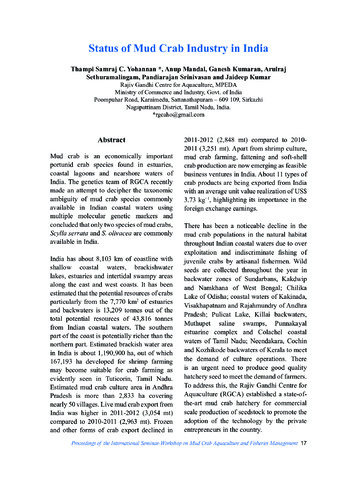 Mud crab is an economically important portunid crab species found in estuaries, coastal lagoons and nearshore waters of India. The genetics team of RGCA recently made an attempt to decipher the taxonomic ambiguity of mud crab species commonly available in Indian coastal waters using multiple molecular genetic markers and concluded that only two species of mud crabs, Scylla serrata and S. olivacea are commonly available in India. India has about 8,103 km of coastline with shallow coastal waters, brackishwater lakes, estuaries and intertidal swampy areas along the east and west coasts. It has been estimated that the potential resources of crabs particularly from the 7,770 km2 of estuaries and backwaters is 13,209 tonnes out of the total potential resources of 43,816 tonnes from Indian coastal waters. The southern part of the coast is potentially richer than the northern part. Estimated brackish water area in India is about 1,190,900 ha, out of which 167,193 ha developed for shrimp farming may become suitable for crab farming as evidently seen in Tuticorin, Tamil Nadu. Estimated mud crab culture area in Andhra Pradesh is more than 2,833 ha covering nearly 50 villages. Live mud crab export from India was higher in 2011-2012 (3,054 mt) compared to 2010-2011 (2,963 mt). Frozen and other forms of crab export declined in 2011-2012 (2,848 mt) compared to 2010- 2011 (3,251 mt). Apart from shrimp culture, mud crab farming, fattening and soft-shell crab production are now emerging as feasible business ventures in India. About 11 types of crab products are being exported from India with an average unit value realization of US$ 3.73 kg−1, highlighting its importance in the foreign exchange earnings. There has been a noticeable decline in the mud crab populations in the natural habitat throughout Indian coastal waters due to over exploitation and indiscriminate fishing of juvenile crabs by artisanal fishermen. Wild seeds are collected throughout the year in backwater zones of Sundarbans, Kakdwip and Namkhana of West Bengal; Chilika Lake of Odisha; coastal waters of Kakinada, Visakhapatnam and Rajahmundry of Andhra Pradesh; Pulicat Lake, Killai backwaters, Muthupet saline swamps, Punnakayal estuarine complex and Colachel coastal waters of Tamil Nadu; Neendakara, Cochin and Kozhikode backwaters of Kerala to meet the demand of culture operations. There is an urgent need to produce good quality hatchery seed to meet the demand of farmers. To address this, the Rajiv Gandhi Centre for Aquaculture (RGCA) established a state-ofthe- art mud crab hatchery for commercial scale production of seedstock to promote the adoption of the technology by the private entrepreneurs in the country.