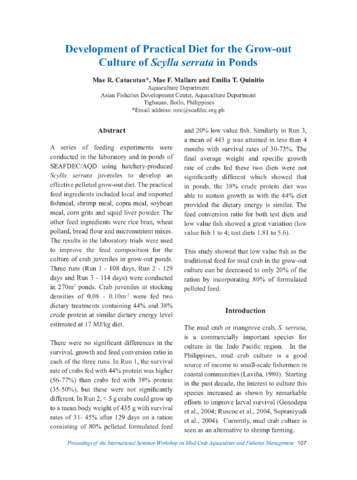 A series of feeding experiments were conducted in the laboratory and in ponds of SEAFDEC/AQD using hatchery-produced Scylla serrata juveniles to develop an effective pelleted grow-out diet. The practical feed ingredients included local and imported fishmeal, shrimp meal, copra meal, soybean meal, corn grits and squid liver powder. The other feed ingredients were rice bran, wheat pollard, bread flour and micronutrient mixes. The results in the laboratory trials were used to improve the feed composition for the culture of crab juveniles in grow-out ponds. Three runs (Run 1 - 108 days, Run 2 - 129 days and Run 3 - 114 days) were conducted in 270m2 ponds. Crab juveniles at stocking densities of 0.08 - 0.10m-2 were fed two dietary treatments containing 44% and 38% crude protein at similar dietary energy level estimated at 17 MJ/kg diet.There were no significant differences in the survival, growth and feed conversion ratio in each of the three runs. In Run 1, the survival rate of crabs fed with 44% protein was higher (56-77%) than crabs fed with 38% protein (35-50%), but these were not significantly different. In Run 2, < 5 g crabs could grow up to a mean body weight of 435 g with survival rates of 31- 45% after 129 days on a ration consisting of 80% pelleted formulated feed and 20% low value fish. Similarly in Run 3, a mean of 443 g was attained in less than 4 months with survival rates of 30-73%. The final average weight and specific growth rate of crabs fed these two diets were not significantly different which showed that in ponds, the 38% crude protein diet was able to sustain growth as with the 44% diet provided the dietary energy is similar. The feed conversion ratio for both test diets and low value fish showed a great variation (low value fish 1 to 4; test diets 1.81 to 5.6).This study showed that low value fish as the traditional feed for mud crab in the grow-out culture can be decreased to only 20% of the ration by incorporating 80% of formulated pelleted feed.