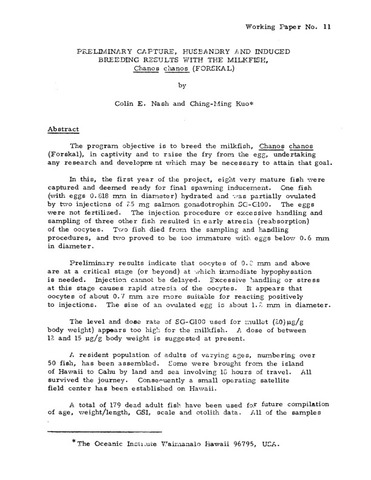 The program objective is to breed the milkfish, Chanos chanos (Forskal), in captivity and to raise the fry from the egg, undertaking any research and development which may be necessary to attain that goal. In this, the first year of the project, eight very mature fish were captured and deemed ready for final spawning inducement. One fish (with eggs 0.818 mm in diameter) hydrated and was partially ovulated by two injections of 25 mg salmon gonadotrophin SG-G100. The eggs were not fertilized. The injection procedure or excessive handling and sampling of three other fish resulted in early atresia (reabsorption) of the oocytes. Two fish died from the sampling and handling procedures, and two proved to be too immature with eggs below 0.6 mm in diameter. Preliminary results indicate that oocytes of 0.8 mm and above are at a critical stage (or beyond) at which immediate hypophysation is needed. Injection cannot be delayed. Excessive handling or stress at this stage causes rapid atresia of the oocytes. It appears that oocytes of about 0.7 mm are more suitable for reacting positively to injections. The size of an ovulated egg is about 1.2 mm in diameter. The level and dose rate of SG-G100 used for mullet (20)µg/g body weight) appears too high for the milkfish. A dose of between 12 and 15 µg/g body weight is suggested at present. A resident population of adults of varying ages, numbering over 50 fish, has been assembled. Some were brought from the island of Hawaii to Oahu by land and sea involving 18 hours of travel. All survived the journey. Consequently a small operating satellite field center has been established on Hawaii. A total of 179 dead adult fish have been used for future compilation of age, weight/length, GSI, scale and otolith data. All of the samples are stored. Determination of the GSI for Hawaiian fish indicated a rapid maturation of oocytes and spermatids in June, with a peak spawning period in July and early August. Adult fish have been placed under photoperiod and temperature-regulated conditions to promote maturation out of season. General husbandry methods have been developed for adults in captivity, and a diet formulated which appears to be acceptable. The work on health care is proving to be very informative. Safe handling systems have been developed using ice, and hypotheses made for the results of this treatment and general conditions of stress. Autopsies on dead fish have revealed growths and evidence of heart attack and gastritis. Techniques using commercially available human clinical test kits are proving useful indicators of stress; for example, the presence of hemoglobin and ketones in the mucus increases with stress. Eye lens protein analyses are being undertaken to determine any different racial origins of milkfish.