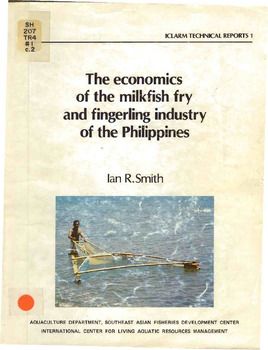 The fry and fingerling industry of the milkfish (Chanos chanos Forskal) in the Philippines is alleged to suffer from certain imperfections. Primary among these are an annual shortage of catch necessary to meet the stocking requirements of the 176,000 ha of fishponds; high fry mortality rates during transp0rt;failure of the pricing system to perform its spatial and form allocative functions; and exploitation of fry gatherers and pond operators by middlemen and nursery pond operators who form the core around which the whole fry and fingerling industry has developed. These alleged imperfections provide the rationale for various government policies affecting the fry and fingerling industry. This study indicates a higher level of industry performance than hitherto supposed. In 1974, an estimated 1.35 billion fry were caught, adequate to meet annual stocking requirements. Allegations of fry shortage were based on simultaneous underestimation of catch and overestimation of stocking requirements, and were traced to temporary price increases resulting from expanded fishpen area, which subsequently declined. Fry storage and transport mortality rates of 8.7% and 6.6%, respectively, compared with a mortality rate of 54% during rearing, indicated that major technical inefficiencies arise in fishponds rather than in the distribution system. Of every 100 fry caught, 38 are harvested at marketable size. Monthly average fry prices among 17 major trading regions were significantly correlated, indicating a high level of information flow in the industry. An examination of the concession system which restricts first sale opportunities of gatherers indicated that concessionaires are unable to capture their full monopsony advantage due to the "competitive fringe" of smugglers. Rather than exploitation, the concession system is a form of indirect municipal tax on fry gatherers. Since the fry industry is a 57-million-peso-per-year industry upon which approximately 170,000 people directly and indirectly depend, it is suggested that the location of future milkfish hatcheries and timing of production be planned such that they complement rather than displace the natural fry fishery and distribution system.