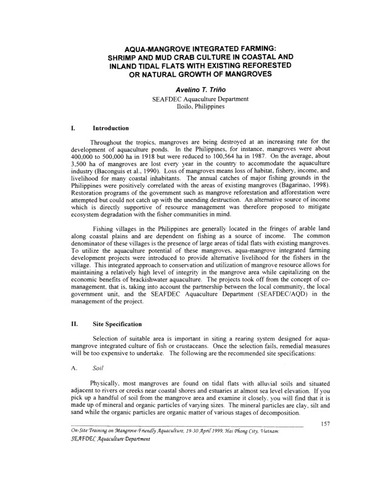 Throughout the tropics, mangroves are being destroyed at an increasing rate for the development of aquaculture ponds. In the Philippines, for instance, mangroves were about 400,000 to 500,000 ha in 1918 but were reduced to 100,564 ha in 1987. On the average, about 3,500 ha of mangroves are lost every year in the country to accommodate the aquaculture industry (Baconguis et al., 1990). Loss of mangroves means loss of habitat, fishery, income, and livelihood for many coastal inhabitants. The annual catches of major fishing grounds in the Philippines were positively correlated with the areas of existing mangroves (Bagarinao, 1998). Restoration programs of the government such as mangrove reforestation and afforestation were attempted but could not catch up with the unending destruction. An alternative source of income which is directly supportive of resource management was therefore proposed to mitigate ecosystem degradation with the fisher communities in mind. Fishing villages in the Philippines are generally located in the fringes of arable land along coastal plains and are dependent on fishing as a source of income. The common denominator of these villages is the presence of large areas of tidal flats with existing mangroves. To utilize the aquaculture potential of these mangroves, aqua-mangrove integrated farming development projects were introduced to provide alternative livelihood for the fishers in the village. This integrated approach to conservation and utilization of mangrove resource allows for maintaining a relatively high level of integrity in the mangrove area while capitalizing on the economic benefits of brackishwater aquaculture. The projects took off from the concept of co-management, that is, taking into account the partnership between the local community, the local government unit, and the SEAFDEC Aquaculture Department (SEAFDEC/AQD) in the management of the project.