Selection of probiotics for shrimp and crab hatcheries 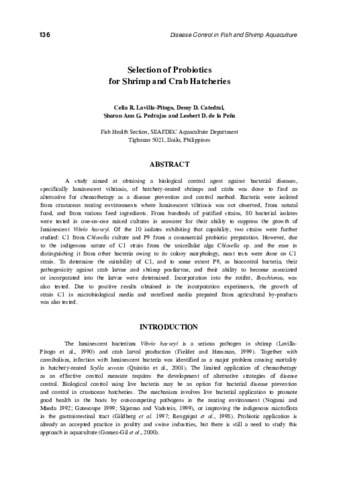 A study aimed at obtaining a biological control agent against bacterial diseases, specifically luminescent vibriosis, of hatchery-reared shrimps and crabs was done to find an alternative for chemotherapy as a disease prevention and control method. Bacteria were isolated from crustacean rearing environments where luminescent vibrosis was not observed, from natural food, and from various feed ingredients. From hundreds of purified strains, 80 bacterial isolates were tested in one-on-one mixed cultures in seawater for their ability to suppress the growth of luminescent Vibrio harveyi. Of the 10 isolates exhibiting that capability, two strains were further studied: C1 from chlorella culture and P9 from a commercial probiotic preparation. However, due to the indigenous nature of C1 strain from the unicellular alga Chlorella sp. and the ease in distinguishing it from other bacteria owing to its colony morphology, more tests were done on C1 strain. To determine the suitability of C1, and to some extent P9, as biocontrol bacteria, their pathogenicity against crab larvae and shrimp postlarvae, and their ability to become associated or incorporated into the larvae were determined. Incorporation into the rotifer, Brachionus, was also tested. Due to the positive results obtained in the incorporation experiments, the growth of strain C1 in microbiological media and unrefined media prepared from agricultural by-products was also tested.