Use of the golden apple snail, cassava, and maize as feeds for the tiger shrimp Penaeus monodon in ponds 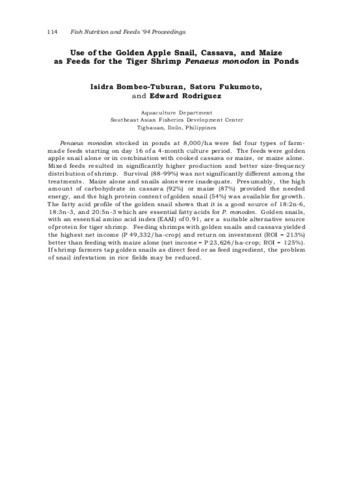 Penaeus monodon stocked in ponds at 8,000/ha were fed four types of farm-made feeds starting on day 16 of a 4-month culture period. The feeds were golden apple snail alone or in combination with cooked cassava or maize, or maize alone. Mixed feeds resulted in significantly higher production and better size-frequency distribution of shrimp. Survival (88-99%) was not significantly different among the treatments. Maize alone and snails alone were inadequate. Presumably, the high amount of carbohydrate in cassava (92%) or maize (87%) provided the needed energy, and the high protein content of golden snail (54%) was available for growth. The fatty acid profile of the golden snail shows that it is a good source of 18:2n-6, 18:3n-3, and 20:5n-3 which are essential fatty acids for P. monodon. Golden snails, with an essential amino acid index (EAAI) of 0.91, are a suitable alternative source of protein for tiger shrimp. Feeding shrimps with golden snails and cassava yielded the highest net income (P 49,332/ha-crop) and return on investment (ROI = 213%) better than feeding with maize alone (net income = P 23,626/ha-crop; ROI = 125%). If shrimp farmers tap golden snails as direct feed or as feed ingredient, the problem of snail infestation in rice fields may be reduced.