Kappaphycus and Gracilariopsis meal as binders for diets of tiger shrimp 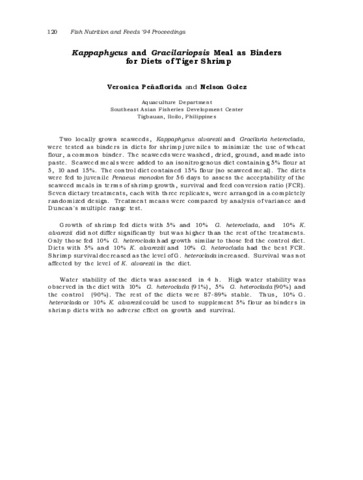 Two locally grown seaweeds, Kappaphycus alvarezii and Gracilaria heteroclada, were tested as binders in diets for shrimp juveniles to minimize the use of wheat flour, a common binder. The seaweeds were washed, dried, ground, and made into paste. Seaweed meals were added to an isonitrogenous diet containing 5% flour at 5, 10 and 15%. The control diet contained 15% flour (no seaweed meal). The diets were fed to juvenile Penaeus monodon for 56 days to assess the acceptability of the seaweed meals in terms of shrimp growth, survival and feed conversion ratio (FCR). Seven dietary treatments, each with three replicates, were arranged in a completely randomized design. Treatment means were compared by analysis of variance and Duncan's multiple range test.Growth of shrimp fed diets with 5% and 10% G. heteroclada, and 10% K. alvarezii did not differ significantly but was higher than the rest of the treatments. Only those fed 10% G. heteroclada had growth similar to those fed the control diet. Diets with 5% and 10% K. alvareziii and 10% G. heteroclada had the best FCR. Shrimp survival decreased as the level of G. heteroclada increased. Survival was not affected by the level of K. alvarezii in the diet.Water stability of the diets was assessed in 4 h. High water stability was observed in the diet with 10% G. heteroclada (91%), 5% G. heteroclada (90%) and the control (90%). The rest of the diets were 87-89% stable. Thus, 10% G. heteroclada or 10% K. alvarezii could be used to supplement 5% flour as binders in shrimp diets with no adverse effect on growth and survival.