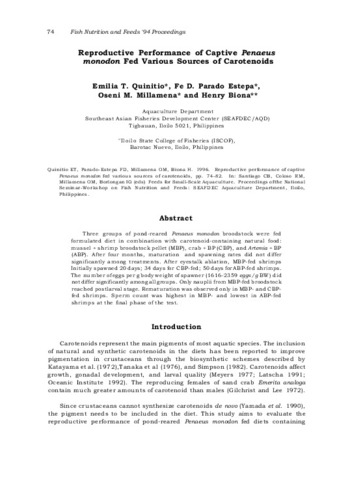 Three groups of pond-reared Penaeus monodon broodstock were fed formulated diet in combination with carotenoid-containing natural food: mussel + shrimp broodstock pellet (MBP), crab + BP (CBP), and Artemia + BP (ABP). After four months, maturation and spawning rates did not differ significantly among treatments. After eyestalk ablation, MBP-fed shrimps Initially spawned 20 days; 34 days for CBP-fed; 50 days for ABP-fed shrimps. The number of eggs per g body weight of spawner (1616-2359 eggs /g BW) did not differ significantly among all groups. Only nauplii from MBP-fed broodstock reached postlarval stage. Rematuration was observed only in MBP- and CBP fed shrimps. Sperm count was highest in MBP- and lowest in ABP-fed shrimps at the final phase of the test.