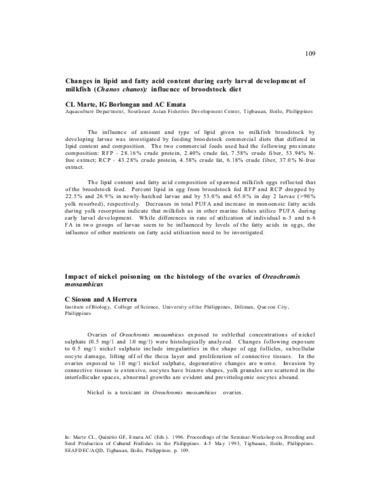 The influence of amount and type of lipid given to milkfish broodstock by developing larvae was investigated by feeding broodstock commercial diets that differed in lipid content and composition. The two commercial feeds used had the following proximate composition: RFP - 28.16% crude protein, 2.40% crude fat, 7.58% crude fiber, 53.94% N-free extract; RCP - 43.28% crude protein, 4.58% crude fat, 6.18% crude fiber, 37.0% N-free extract. The lipid content and fatty acid composition of spawned milkfish eggs reflected that of the broodstock feed. Percent lipid in egg from broodstock fed RFP and RCP dropped by 22.5% and 26.9% in newly-hatched larvae and by 53.0% and 65.0% in day 2 larvae (>90% yolk resorbed), respectively. Decreases in total PUFA and increase in monoenoic fatty acids during yolk resorption indicate that milkfish as in other marine fishes utilize PUFA during early larval development. While differences in rate of utilization of individual n-3 and n-6 FA in two groups of larvae seem to be influenced by levels of the fatty acids in eggs, the influence of other nutrients on fatty acid utilization need to be investigated.