LHRHa and pimozide-induced breeding in the catfish, Clarias macrocephalus (Gunther) 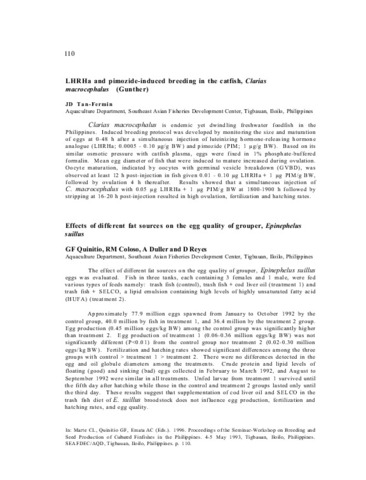 Clarias macrocephalus is endemic yet dwindling freshwater foodfish in the Philippines. Induced breeding protocol was developed by monitoring the size and maturation of eggs at 0-48 h after a simultaneous injection of luteinizing hormone-releasing hormone analogue (LHRHa; 0.0005 - 0.10 µg/g BW) and pimozide (PIM; 1 µg/g BW). Based on its similar osmotic pressure with catfish plasma, eggs were fixed in 1% phosphate-buffered formalin. Mean egg diameter of fish that were induced to mature increased during ovulation. Oocyte maturation, indicated by oocytes with germinal vesicle breakdown (GVBD), was observed at least 12 h post-injection in fish given 0.01 - 0.10 µg LHRHa + 1 µg PIM/g BW, followed by ovulation 4 h thereafter. Results showed that a simultaneous injection of C. macrocephalus with 0.05 µg LHRHa + 1 µg PIM/g BW at 1800-1900 h followed by stripping at 16-20 h post-injection resulted in high ovulation, fertilization and hatching rates.